The Senate passed a bipartisan bill on Nov. 17 to make anthrax vaccines available to first responders.

The legislation directs the Secretary of Homeland Security, in consultation with the Secretary of Health and Human Services, to establish a pilot program to provide eligible anthrax vaccines from the Strategic National Stockpile that will be nearing the end of their labeled dates of use to emergency response providers who would be at high risk of exposure to anthrax if such an attack should occur and who voluntarily consent to such administration.

“Our bill has received support from both sides of the aisle and would take important steps to equip our first responders with anthrax vaccines that would otherwise go to waste,” said Senator Kelly Ayotte (R-NH). “I’ve always been proud to support our first responders who put their lives on the line every day to protect and serve our communities, and I applaud my colleagues for finally passing this important legislation.”

Chief John Sinclair, International Association of Fire Chiefs President and Chairman of the Board, added: “I thank Senators Ayotte, Booker, and Coons for their leadership on this legislation. The threat of anthrax is real. This legislation will help us to address this threat by establishing a voluntary pilot program to vaccinate first responders.”

During a HSGAC hearing on the state of our nation’s biodefense in October 2015, former Senator Joseph Lieberman (I-CT), who co-chaired the Blue Ribbon Study Panel on Biodefense, discussed the panel’s recommendation that emergency services providers be supported with resources they need to ensure their safety and the safety of our nation and expressed support for Ayotte’s First Responder Anthrax Preparedness Act.

During that hearing, Senator Lieberman noted that “terrorist groups like the Islamic State of Iraq and the Levant are devastating the Middle East, setting new horrific standards for inhumanity and brutality, and have specifically endorsed the use of biological weapons and threatened to use them against the American homeland. So this is a real threat.”

Former Homeland Security Secretary Tom Ridge, who co-chaired the Blue Ribbon Study Panel on Biodefense with Lieberman, further noted that he “[doesn’t] think we can discount, given the nature of the world today, some of these pathogens either leaving the laboratories of the nation state, and particularly ending up in the hands of terrorist organizations.”

In response to a question for the record submitted by Senator Ayotte to Dr. Aaron Firoved, Director of the National Biosurveillance Integration Center and Senior Biodefense Advisor at the Department of Homeland Security following an April 2016 HSGAC hearing entitled “Federal Perspective on the State of Our Nation’s Biodefense” about how the First Responder Anthrax Preparedness Act would help the department better prepare and support the first responder community, Dr. Firoved said, “After an anthrax attack, first responders may find themselves having to react immediately to the incident before complete information is available, which may increase their risk for exposure. Pre-event voluntary anthrax vaccinations will help reduce the risk and strengthen first responder preparedness and protection.” 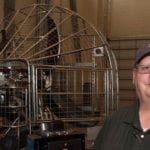