Edgewood Chemical Biological Center (ECBC) is now one of only two laboratories in the United States that is permitted to analyze OPCW biomedical samples recovered from sites where there is a suspected use of chemical warfare agents.

The Forensic Analytical Center at ECBC earned an “A” grade from the Organization for the Prohibition of Chemical Weapons (OPCW) following its first-ever biomedical proficiency test.

As a part of its responsibility to protect the Chemical Weapons Convention (CWC), the OPCW has designated laboratories worldwide that are equipped and ready to analyze samples such as soil, water, and blood from suspected contaminated sites.

ECBC’s Forensic Analytical Center was the first U.S. laboratory to become a designated OPCW laboratory. They were given that status by the Director General of the OPCW in 1996. In order to maintain accreditation, all OPCW laboratories must adhere to strict administrative guidelines and successfully complete and maintain a three-year rolling average of at least two “As” and one “B”.

The Center’s scientists and technicians conduct highly sophisticated chemical and forensic analysis for monitoring the proliferation of weapons of mass destruction (WMD), as well as analysis of samples associated with possible terrorist attacks or breaches of security.

The Forensic Analytical Center features a wide range of analysis capabilities, including:

The only other OPCW-designated laboratory in the U.S. is the Lawrence Livermore National Laboratory in California.

Historically, the OPCW has focused on environmental samples such as soil or water for proficiency tests. In 2009, to address the need for capability to provide proof of human exposure to chemical agent, OPCW started to conduct international practice exercises using biomedical samples. In 2016, after five practice exercises, the OPCW administered its first biomedical proficiency test, in which ECBC participated.

The biomedical proficiency test presented new challenges to the team. In the biomedical tests, there are smaller amounts of available sample. Also, biomedical samples tend to require more preparation time, and are more complex. “The spiking levels for the biomedical test are typically 2-3 orders of magnitude lower than the environmental samples, so we are measuring chemicals in the low part per billion level,” said E. Alex Jestel, part of the testing team. “The analysis of biomedical samples is much more focused since a specific agent is suspected based on either previous environmental analysis and/or symptoms of exposure. For environmental samples we run numerous analyses to look for an extensive target list, while for biomedical we are only doing one or two analyses, but each one can take a couple days.”

Edgewood’s Forensic Analytical Center completed the environmental proficiency test shortly after the biomedical. They have received an “A” and continue their partnership and status as an OPCW-designated laboratory that can receive both environmental and biomedical samples.

“Because of this designation we are officially allowed to receive biomedical samples from OPCW which demonstrates we are both technically and logistically capable of doing the analysis and preparing a legally defensibly report,” said Jestel. “It’s a feather in our cap, but it also ensures that U.S. diplomats and the Department of Defense have internationally recognized capability for analysis of both biomedical and environmental samples in a legally defensible manner”.

Adapted from ECBC for context and format by CBRNE Central. 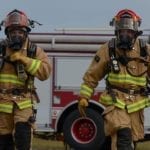