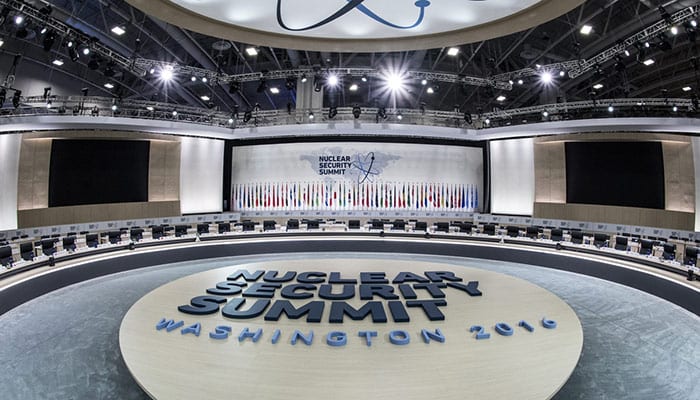 The Domestic Nuclear Detection Office’s (DNDO) efforts in nuclear forensics and detection were highlighted recently at the fourth Nuclear Security Summit in Washington, D.C. from March 31 to April 1, 2016.

In support of the 2016 Summit, DNDO led the development of two nuclear forensics contributions, commonly known as “house gifts,” which are a nation’s accomplishments since the previous Summit.  These house gifts provide a means for further collaboration with international partners.

The first house gift was a fact sheet (.pdf) on certified reference materials, which are used to verify the accuracy of nuclear forensics conclusions.  DNDO is working with the interagency to develop these materials and make them available to the international community.  Nuclear forensics helps a nation to determine the origin of interdicted nuclear and radiological material and hold responsible parties accountable.

The second was a model that can be used for communicating with the public in a timely and effective manner during a nuclear security incident as well as in the day-to-day environment.

Additionally, DNDO worked with other countries on a pair of nuclear security commitments made jointly by multiple international partners. The first commitment is to combat illicit trafficking and malevolent use of nuclear and other radioactive material by developing a framework for detecting, analyzing, and reporting on material that is outside of regulatory control. This is the first time ministers and heads of state formally endorsed efforts to develop and implement national-level nuclear security detection architectures.

The second commitment is to present the Illicit Trafficking Radiation Program report to the international community. This program was a joint U.S.-European Union effort to evaluate nuclear detection technologies against common performance goals. This report will allow international partners to better understand the performance of commercially available detectors, harmonize standards, and encourage industry to advance technology.

DNDO stated that they will continue to support international efforts to prevent nuclear terrorism after this Nuclear Security Summit through participation in international fora such as the Global Initiative to Combat Nuclear Terrorism and the International Atomic Energy Agency, as well as through bilateral engagements with partner nations.  These efforts help protect the Homeland against the threat of nuclear terrorism.