SRI International has been awarded a $12.2 million contract from the Biomedical Advanced Research and Development Authority (BARDA) to continue development of a diagnostic test for absorbed doses of radiation following a radiological incident.

An SRI team, led by David Cooper, Ph.D., director of the Sensor Systems Laboratory at SRI International, has developed such a test with subcontractors DCN Diagnostics, Evolve Manufacturing, and Stanford University School of Medicine.

The project began more than five years ago when BARDA selected Cooper’s team to develop a radiation biodosimeter. “At this point, there is nothing else like it that takes a sample from an individual and assesses whether they have absorbed ionizing radiation or not,” said Cooper. Currently, if a person has absorbed a significant dose of ionizing radiation, there is nothing that can be done beyond waiting to see what symptoms develop, which roughly correlate with exposure level.

“If you have hundreds of thousands of people potentially affected, you want to screen quickly and use medical resources efficiently,” added Cooper. “Our goal is to develop a quick and simple point-of-care medical device that the government, first responders, hospitals and doctors can use in the field to determine a person’s absorbed dose of ionizing radiation.”

Any living tissue in the human body can be damaged by ionizing radiation. According to the U.S. Environmental Protection Agency, some of the early symptoms of radiation sickness are fairly nonspecific and include nausea, weakness, hair loss, skin burns or diminished organ function (especially bone marrow)—and can eventually cause death. The extent of damage depends on the dose of radiation received.

To conduct this assay, a finger-prick blood sample is taken, and results of whether a person has absorbed a clinically significant dose of radiation will be available in less than 30 minutes.

The technology is based on a lateral flow immunoassay method, similar to home pregnancy test kits. Antibodies specific to a panel of radiation-responsive proteins and a proprietary phosphorescent reporter system allow for quantitative measurement of protein concentrations in the patient’s blood sample.

“Because our test actually measures biological response to radiation rather than a physical radiation dose, the information obtained is very important,” said Cooper.

Due to differences in individual’s sensitivities to radiation effects, each subject’s response to the same physical dose may be different, therefore the immediate medical decision may be different.

This current round of BARDA funding will support verification testing of the system, which is one step closer to getting FDA clearance of the device. The technology employed in this device could also be applied to other diagnostic tests, such as infectious diseases. 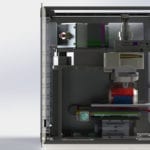