Researchers from the University of Texas at San Antonio (UTSA) Laboratory of Turbulence Sensing & Intelligence Systems are taking a closer look at how turbulence diffuses chemicals in the event of a chemical weapons attack.

Funded by the US Department of Army Edgewood Chemical and Biological Center (ECBC), Kiran Bhaganagar and her team are developing an early warning prediction system using a weather research forecasting model (WRF) with local sensor data to predict air-borne release chemical plume. Local turbulence and the type of the gas dictates the direction of the plume path.

The intelligence system relies on solving an intricate set of thousands of mathematical equations and processing millions of data within a few minutes. This is done on supercomputing processing systems with 50,000 graphical core units working simultaneously to predict the plume path in real-time.

The team simulated the same conditions as a recent Syrian gas attack on a small town of Khan Shaykhun, in which as many as 100 people may have been killed. Using this intelligence system and local conditions in Khan Sheikhoun, the team was able to predict exactly how far and high the gas would spread, and at what speed. When they compared the simulation data to the actual details of the real attack, they found that they matched. The model worked and could realistically warn potential victims of a chemical attack to flee the area.

Bhaganagar’s study demonstrates that local wind and terrian conditions and atmospheric turbulence make chemical attacks even more deadly than previously understood, and proposes that analysis of the wind and the use of data-collecting drones could make for an early warning system that would allow people in potentially deadly areas to evacuate before the gas reaches them.

The challenge in developing the intelligence systems is to obtain the local wind, turbulence surface and chemical gas sensing data. Currently, the team is demonstrating using aerial drones that scan the region in the vicinity of the chemical source and get point-point sensing data.

“We are moving from traditional single-point stationary sensors to novel concept of mobile sensing which is low cost, fast collection of sensing data and very accurate,” said Bhaganagar. “This is the next step. We will deploy low-cost aerial drones to collect wind and gas concentration sensing data. We can alert people to danger within minutes.”

Read more: Assessment of the plume dispersion due to chemical attack on April 4, 2017, in Syria. 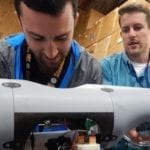