A network of smartphone-sized mobile devices that can detect the tiniest traces of radioactive materials has recently undergone real-world testing in New York.

The demonstration was conducted at one of the Port Authority of New York and New Jersey’s major transportation hubs where DARPA tested more than 100 networked SIGMA sensors. During the month-long test, the system provided more than a 100-fold increase in ability to locate and identify sources of radiation as compared to currently installed systems.

All sources of radiation that SIGMA sensors identified were non-threatening, but the system proved how it could pinpoint the location and intensity of a source and specify, in each case, the type of radiation to which it was alerting authorities.

Fulfilling the SIGMA program’s initial goals, the pocket-sized radiation “pager” sensors developed by DARPA and used in the exercise can be easily worn on a person’s belt, are one-tenth the cost of conventional sensors, and are up to 10 times faster in detecting gamma and neutron radiation. Moreover, the program achieved its price goal of 10,000 pocket-sized detectors for $400 per unit.

“We are extremely pleased with SIGMA’s achievements to date in advancing radiation detection technology to fit in a portable, pocket-sized form factor at a price that’s a fraction of what current advanced sensors cost,” said Vincent Tang, program manager in DARPA’s Defense Sciences Office. “The ability to network hundreds, and soon many thousands of these smart detectors would make cities in the United States and around the world safer against a wide variety of radiological and nuclear threats.”

The test with the Port Authority was the largest deployment of the sensors to date, but SIGMA has been refining the algorithms for improving the radiation-sensing technology in its devices based on experience over the past two years in more than 10 real-world deployments and exercises with local, state, federal and military units, including tests in the nation’s capital. A large-scale test deployment of more than 1,000 detectors is being planned for Washington, D.C., later this year.

“A key feature of the SIGMA architecture is that it allows for automated, real-time detection, identification, and tracking of nuclear threats with continuous situational awareness via web-based command and control interfaces,” Tang said. “We’re continuously improving the system and evaluating it in laboratory and operational settings. The user feedback and support from our Port Authority collaboration, as well as government partners such as the Department of Homeland Security’s Domestic Nuclear Detection Office (DNDO) and the UK Home Office, have been invaluable for SIGMA’s development.”

Ultimately, Tang noted, SIGMA is expected to provide foundational capabilities for a range of detection approaches, including two under development by DNDO: the Radiation Awareness and Interdiction Network (RAIN), which is being designed to monitor highways and roadways for vehicle-born threats, and the Mobile Urban Radiation Search (MURS) project, which aims to provide an advanced mobile detection capability that could adjudicate detection alarms encountered by SIGMA or RAIN.

In addition to the handheld devices, large SIGMA prototype detectors with increased capabilities and reduced costs that can be deployed at fixed sites or in vehicles are also coming on line. For example, large SIGMA neutron detectors have now shown twice the sensitivity compared to existing neutron-detection drive-through portals. Multiple vendors reached the price target of $5,000 per unit, which is approximately one-tenth the cost of today’s comparable large neutron detectors, while achieving or exceeding this required performance. Hundreds of large SIGMA detectors are in the process of being networked for gamma and neutron radiation detection at a number of critical locations and on vehicles.

DARPA is planning to demonstrate SIGMA’s full city- and regional-scale, continuous wide-area monitoring capability in 2017 and to transition the operational system to local, state, and federal entities in 2018. 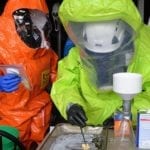