According to officials at the Department of Justice, a 48-year-old resident of Brookshire has been ordered to prison after admitting to transportation of explosives with the intent to kill, injure and intimidate a person.

Julia Ann Poff pleaded guilty July 1, 2019 and was sentenced today to a 120-month sentence followed by three years of supervised release. She was also ordered to pay $9,700 in restitution.
Poff admitted to mailing a package on or about Oct. 2 – 3, 2016, that contained a homemade bomb that was addressed to the former president of the United States. As part of her plea, she also acknowledged mailing two similar packages addressed to the Texas governor and then Acting Social Security Administrator.

Each of those packages contained a victim-activated, booby trapped, improvised explosive device (IED) containing explosives materials. The investigation revealed that on Oct. 6, 2016, authorities intercepted a U.S. Postal Service (USPS) small, flat rate box at a White House mail handling facility at Bolling Air Force Base in the District of Columbia. They opened the package, and it appeared to contain a bomb.

An FBI explosives expert conducted an examination and determined it to be a homemade bomb.
Further examination linked the box and its contents to Julia Poff or her husband. The outer box contained a taped address label, under which they found a feline hair. Testing revealed this hair was microscopically consistent with the hairs taken from a cat the Poff family cared for and owned. Also, a box contained within the USPS box contained a micro-USB cable box, cellular phone, hobby fuse, matches, paper wadding, plastic sacks, sandpaper and two 20-ounce coke bottle caps as well as pyrotechnics and smokeless powder.

Poff’s daughter identified the phone as her old cell phone which was last seen in their home’s garage in August or September 2016. Authorities also learned Poff used her bank debit card to purchase a micro-USB box with the same bar code as the one found in the USPS package.
At the time of her plea, Poff admitted she was solely responsible for sending the bomb-filled packages.

She has been and will remain in custody pending transfer to a U.S. Bureau of Prisons facility to be determined in the near future. 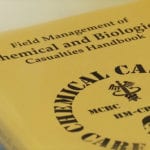