The U.S. Department of Transportation’s John A. Volpe National Transportation Systems Center is seeking sources capable of supporting the cleanup and closure of contaminated sites and the proper disposition of obsolete and abandoned infrastructure.

The Volpe Center currently provides environmental remediation and decommissioning services for a variety of Federal agencies and departments at worksites across the nation. The majority of this work is performed for the Federal Aviation Administration (FAA) in support of the FAA’s National Environmental Cleanup (ECU) and Facility Decommissioning (FD) Programs.

Under the ECU Program, the FAA is responsible for the investigation and cleanup of environmental contamination at FAA owned and operated properties where FAA maintains liability due to past site operations or waste disposal activities.

Under the decommissioning program, the FAA is responsible for the decontamination, demolition, and disposition of facilities and infrastructure rendered obsolete by the FAA modernization efforts, Although the majority of work is expected to be in support of the FAA’s ECU and FD Programs, work for other agencies such as the U.S. Maritime Administration (MARAD) and the U.S. Environmental Protection Agency (EPA) is likely.

The Volpe Center has identified multiple task areas where support is needed including but not limited to containment, removal, treatment (on-site, off-site, and in-situ), sampling and analysis for monitoring and control, transportation and disposal, operation and maintenance, decontamination of chemical, biological, radiological, and nuclear (CBRN) material, hazardous materials abatement, demolition, site restoration and any other actions necessary to support site cleanup, decommissioning, and closure.

Further details are available via Solicitation Number: DTRT5715SS00004. Capability statements must be submitted by May 21, 2015. 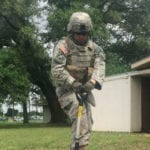