The Centers for Disease Control and Prevention (CDC) is awarding a new contract to The Mining Safety and Health Program, Environmental and Occupational Health Mel & Enid Zuckerman College of Public Health, University of Arizona in support of responder health.

University researchers will perform environmental studies of post-structural fire environments and identify the possible increase in acute and chronic health risks associated with exposure to responders and investigators during and after overhaul activities.

Overhaul is the phase of a structural fire where hidden fires, hot embers, and combustion sources are identified and completely extinguished to avoid re-ignition.

During firefighter overhaul activities, respiratory protection is rarely utilized. Resultant exposures to smoke and fine particulates have been shown to result in both acute and chronic health effects, including.

Primary activities under the research effort include:

The University of Arizona, College of Public Health (UACPH) first demonstrated acute respiratory effects in firefighters during overhaul in 2001, Subsequently, overhaul activities have been simulated in the laboratory by burning standard residential materials inside a small burn chamber, extinguishing the fire, and allowing the residual emissions to collect inside the test chamber.

Subsequent monitoring of the atmosphere within the test chamber was performed to characterize the emissions. This foundational study identified the nature of potential exposures during firefighter overhaul activities that led to further occupational exposure research.

Recent studies published in 2007 and 2009 evaluated the effectiveness of air-purifying respiratory protection during laboratory-simulated activities. This resulted in the identification of sub-standard performance of multi-gas cartridges, but promise for Chemical, Biological, Radiological, and Nuclear (CBRN) canisters. These studies utilized the burn test chamber from earlier studies, but introduced measurements of the contaminants through multi-gas cartridges and CBRN canisters under expected breathing volumes.

Specific findings of prior UACPH studies include:

It is not clear that current respiratory precautions in the post-fire environment adequately protect these workers from chemical gas, vapor, and particulate hazards.

The new study will be conducted to more fully understand the possible increase in acute and chronic health risks associated with exposure to overhaul environments. During this study, further assessments will be made of the strengths and limitations of CBRN canisters to protect against a wide variety of contaminants released in actual post-fire environments.

The study will be performed in collaboration with the scientists at the University of Arizona, through partnership with several fire departments located in the Tucson metropolitan who will be engaged in performing their duties in live overhaul environments. 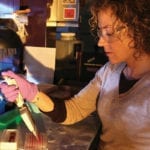