Topics in this issue of CBRNE Particles include the ongoing investigation into the Manchester terror attack, improving remote detection of radioactivity, and CBRN equipment sales to India.

British counter-terrorism police raided more locations in and around Manchester on Friday, amid fears that the suicide bomber who killed 22 people may have made another explosive device that could have fallen into the hands of extremists. Eight men are now in custody in connection with the bombing at the Ariana Grande concert at the Manchester Arena on Monday. USA Today >>

Taking Down Terrorists in Court

The Eastern District of New York has long been known for its work against organized crime. Since the September 11th attacks, E.D.N.Y. has also become an aggressive prosecutor of terrorism, securing more convictions than any other U.S. Attorney’s office. Ahmad’s specialty is counterterrorism, her subspecialty “extraterritorial” cases, which means that she spends a great deal of time overseas, negotiating with foreign officials, interviewing witnesses, often in prison, and combing the ground for evidence in terror-related crimes against Americans. New Yorker >>

Diplomats and counterterrorism experts say Russia is reshuffling its diplomats, making new appointments and proposing to move Kislyak or another top Russian official to U.N. headquarters in New York, and one of those officials is expected to run a new U.N. counterterrorism office. Before that happens — if it does — the Russians will have other vacancies to fill as a priority. For starters, there has been no Russian Ambassador at the U.N. since the sudden death in February of Vitaly Churkin. CBS News >>

The Manchester Bombing and British Counterterrorism

This was the worst terrorist attack the country had suffered since al Qaeda struck the London transport network on July 7, 2005, and the British government has raised its terrorist threat level to “critical,” meaning that another attack could occur imminently. Elements of the Manchester attack are unusual. For example, Libyan involvement in Islamist attacks in the United Kingdom is very rare. Other elements, however, are very familiar. Foreign Affairs >>

To get accurate information without putting people or equipment at risk, responders would benefit from better technology to sense radioactive material from afar. That could come from high-power pulsed electromagnetic waves, reports a team from Ulsan National Institute of Science & Technology (UNIST). Chemical & Engineering News >>

Hanford Mishap Should Be Wake-Up Call

The near-disaster last week at the Department of Energy’s (DOE) Hanford nuclear site in Washington state, where the U.S. once produced much of the plutonium for its nuclear weapons, should be a wake-up call for Energy Secretary Rick Perry. DOE declared a site-wide emergency May 9 when workers discovered a 400-square-foot sinkhole over a 1960s tunnel crammed with railcars of nuclear waste, ordering thousands of workers to shelter in place. The Hill >>

A Predictable Nuclear Accident at Hanford

It would be nice to say that Hanford is a unique canker on the US nuclear landscape, but it is not. It may be the most contaminated, but it is far from alone. At the Rocky Flats facility outside Denver, where workers fashioned Hanford’s plutonium into cores for nuclear weapons, there were major fires in 1957 and 1969; each sent plutonium-laced plumes of smoke over nearby communities. Bulletin of the Atomic Scientists >>

Contamination at Hanford Tank Did Not Come From Leak

Radioactive contamination found on a piece of equipment on the Hanford Nuclear Reservation was not the result of a leak in an underground nuclear waste storage tank. The U.S. Department of Energy said Wednesday that an analysis has ruled out that the contamination came from a leak within double-walled tank AZ-101. The department and its contractor are now looking at other potential sources, such as historical contamination from previous work at the tank. Spokesman-Review >>

Physicists from Tomsk Polytechnic University are creating protective titanium nitride-based coatings for shells of fuel elements (fuel rods) of nuclear reactors. Such shells can significantly reduce hydrogenation of containers in which nuclear fuel is placed, extend their service life and protect reactor from explosion like at the Fukusima radiation disaster. Chem.info >>

David T. Hobbs is an expert in the complicated chemistry of nuclear waste management. He’s studied nuclear waste materials, radiochemical separations, and complex chemical environments for more than three decades. But three years ago, when an accident in a New Mexico repository brought disposal of U.S. defense nuclear wastes to a standstill, he was called to investigate a different kind of material—cat litter. Hobbs, who doesn’t own a cat, is one of the researchers who studied the nuclear waste mixture that in 2014 led to a drum failure and radiological release at the Waste Isolation Pilot Plant (WIPP) near Carlsbad, N.M. Chemical & Engineering News >>

There’s a truism about disaster planning that goes something like this: Responders will almost certainly need to improvise during a disaster. But when disaster strikes, it’s very difficult to improvise a plan. So it’s important to create that plan, and ensure personnel are educated and trained to execute the plan, before the disaster happens. That makes having to change course or make adjustments on the fly that much more feasible. NAEMT >>

Preparing to Meet the Needs of Pediatric Patients in Disasters: Progress and the Path Forward

By working together, HHS is finding solutions to problems affecting children in disasters. Since 2010, HHS has focused in finding ways to improve disaster health for children through the Children’s HHS Interagency Leadership on Disasters (CHILD) Working Group. ASPR Blog >>

Sanofi Pasteur has rejected a request from the US Army to set an affordable US price for a Zika virus vaccine that the company is developing with American taxpayer funds, prompting an angry response from Senator Bernie Sanders. STAT >>

The Islamic State group used prisoners as “human guinea pigs,” carrying out chemical weapons experiments in order to plan for attacks against the West, documents found in Mosul have revealed. The papers detailing the tests, which led to the agonizing deaths of prisoners, were discovered at Mosul University in January when it was recaptured by Iraqi special forces. Newsweek >>

The Department of Homeland Security is seeking to develop methodologies to rapidly characterize the virulence of existing and emerging biothreats to inform risk assessments, disease preparedness and response activities. Global Biodefense >>

The Chemical Attack in Syria: Sorting Truth from Propaganda

International media have widely reported on a sarin nerve gas attack that was said to have occurred at the town of Khan Sheikhoun in Idlib province, Syria on 4 April 2017, killing dozens of people and injuring many more. Syria and its allies have denied responsibility, claiming that rebels had stored chemical weapons in a warehouse that was bombed by the Syrian air force, and that leaking gas from this event caused the casualties. The Interpreter >>

As the latest horrific attack in Syria heightened global awareness of this outlawed form of warfare, a new disposal plant is set to open in Colorado this summer. Getting rid of lethal chemicals encased in explosive shells is no simple task. For decades, the U.S. simply buried or burned its old or unwanted chemical munitions. But new environmental laws passed in the 1990s mandated that a more responsible approach be taken. Fast Company >>

Izumi Nakamitsu, the United Nations’ new head of disarmament, gave her first briefing to the 15-member Security Council on Tuesday, focusing on the latest developments on chemical weapons in Syria.  As the high representative for disarmament affairs, the Japanese is in charge of a wide-ranging portfolio that includes nuclear disarmament and nonproliferation, weapons of mass destruction, and chemical and biological weapons. Japan Times >>

The cell is comprised of chemical weapons specialists from Iraq and Syria who have not previously worked together, the official added. The new unit is being set up in an ISIS-controlled area in Syria within the Euphrates River Valley, between Mayadin, Syria and the town of al Qaim, just across the Iraqi border. CNN >>

In 1983, a Wargame Nearly Led to Nuclear War

In 1983, a classified NATO exercise led the Soviet Union to fear a nuclear attack was imminent. The Able Archer ’83 exercises, designed to train U.S. and NATO forces to manage nuclear escalation in a conflict, briefly made such conflict a terrifyingly real possibility by accidentally triggering alarm bells in the Kremlin. Popular Mechanics >>

During the Korean War, General Douglas MacArthur requested permission to use more than 30 nuclear weapons. This episode dives into the story and takes you inside modern day North Korea with MIT expert Dr. Jim Walsh. Center for Arms Control and Non-Proliferation >>

The command’s APG facilities are spread over a cluster of temporary buildings in the post’s Edgewood Area. The new facilities, which are a combination of renovated and new structures, will occupy two buildings with a combined 186,000 square feet on the post’s main area in Aberdeen. Baltimore Sun >> 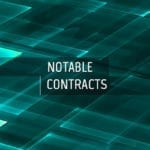