To effectively plan for such events, certain key factors must be taken into consideration: common causes and challenges, as well as resources available. By communicating with the local medical examiner/coroner, being familiar with mass fatality plans, and learning about any pertinent capabilities and limitations, emergency planners can make informed decisions and close existing gaps. Domestic Preparedness >>

Long a tool of allies trying to foil improvised explosive devices, unmanned systems now may be entering the fray against friendly forces. Both terrorists and nation-states are striving to employ these systems, especially airborne platforms, to deploy new types of improvised threats against U.S. and coalition forces. AFCEA >>

The European Commission-funded Shamisen project has published 28 recommendations to improve the preparedness and response to a nuclear accident. The recommendations follow an 18-month review of the response to previous accidents, particularly Chernobyl and Fukushima. World Nuclear News >>

Building an H-Bomb in Plain Sight

North Korea’s latest nuclear weapon test is by far its largest yet. Preliminary analysis of the seismic signals it generated while exploding under a mountain last week suggest it was at least 100 kilotons in strength, and the North Koreans themselves claim it was “hundreds” of kilotons. The Atlantic >>

For the doubters, North Korea released a highly specific technical statement through its state-run Korean Central News Agency meant to signal specific knowledge of thermonuclear bomb design — specifically, what is known as a two-stage Teller-Ulam bomb. The accomplishment, if verified, would be no small feat. War on the Rocks >>

Could Gene Editing Tools Such as CRISPR Be Used as a Biological Weapon?

The gene editing technique CRISPR has been in the limelight after scientists reported they had used it to safely remove disease in human embryos for the first time. This follows a “CRISPR craze” over the last couple of years, with the number of academic publications on the topic growing steadily. The Conversation >>

The National Academies of Sciences, Engineering, and Medicine are working to develop a report on security concerns around synthetic biology. They acknowledge the wide range of current concerns from those who see whole new threats emerging along with the engineering of biology and those who think our response to threats like bioterrorism is essentially the same when you throw engineered versions of viruses or pathogens in the mix. PLOS SynBio Community >>

Assad’s Attacks Should Not Be Repeated, Forgotten, or Excused

As the international community marks the 20th anniversary of the implementation of the Chemical Weapons Convention (CWC) this year, the Bashar al-Assad regime’s flagrant violations of the Treaty’s fundamental obligations should be of high concern. They also should serve as a reminder that chemical weapons remain a threat that demands a global solution. RAND >>

Workers in Pueblo are dismantling 2,600 tons of old shells containing mustard gas as part of a U.S. treaty signed in 1997 banning all chemical weapons. The wastewater produced during that process was too much for the Pueblo facility to handle, so they started shipping it to Veolia Environmental Services Port Arthur, Texas in July. CBS Denver >>

U.N. human rights investigators said in a report Wednesday that Syrian government forces were responsible for 20 chemical weapons attacks primarily against civilians during the past four years. The Independent Commission of Inquiry on Syria said some of those attacks happened between March and July of this year in Khan Sheikhoun, Al-Latamneh and eastern Ghouta. VOA News >>

United Nations war crimes investigators have formally blamed the Syrian government for a sarin attack on the town of Khan Sheikhun in April that killed at least 83 people and wounded almost 300 more. The international commission of inquiry on Syria, which is run by the UN, said it had compiled extensive evidence that the Syrian air force had carried out an airstrike that released the nerve agent. The Guardian >>

Two explosions generating billows of thick black smoke were reported last week at a flooded chemical plant in Crosby, Texas, just 30 miles northeast of downtown Houston. The unprecedented flooding overwhelmed the plant’s primary power source as well as two sources of backup power, causing the facility to lose refrigeration. This is critical for organic peroxides – compounds used in making pharmaceuticals and construction materials – which burn if not stored at a low temperature. Occupational Health & Safety >>

Estimates of North Korea’s chemical and biological weaponry are imprecise and often contested, but they are sufficient to raise grave security concerns in South Korea, particularly considering Seoul’s vicinity to the border. Contrary to Pyongyang’s nuclear capabilities, which are showcased in the recurrent tests and military parades, the advancements of its chemical and biological programs remain a mystery. CBRNe Portal >>

Birling Gap Beach: Shipwreck ‘Could Be to Blame for Mist’

The chemical cloud that caused a Sussex beach to be evacuated on Sunday might have come from a shipwreck, the coastguard agency has suggested. Part of the East Sussex coast was engulfed by the cloud and about 150 people were treated for breathing problems, stinging eyes and vomiting. BBC >>

FLIR this month announced that it will realign its business operations into three principle business units: Government and Defense, Industrial, and Commercial. Government and Defense: will consist of the current Surveillance and Detection segments, excluding the Outdoor and Tactical Systems (OTS) business. The Commercial BU will consist of the current Maritime and Security segments, along with the ITS and OTS businesses. FLIR >> 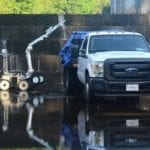