Army Staff Sgt. Maliek Kearney and Army Sgt. Danielle Doucette transfer a sample of simulated nuclear fallout as Ruth Anne Sorter from the Department of Energy looks on during the Prominent Hunt exercise in July 2012 in Indiana.

Exercise Prominent Hunt was based on a scenario involving a detonation of a terrorist improvised nuclear device. Participants practiced the federal response to this hypothetical scenario—from initial notification of an attack, deployment to the site, collection of debris ground samples, to the transport of the samples to a designated laboratory for nuclear forensics analysis.

The National Technical Nuclear Forensics Center within DHS’s Domestic Nuclear Detection Office (DNDO) led the planning for this exercise and facilitated its execution.

DNDO is mandated to provide centralized stewardship, planning, assessment, gap analysis, exercises, improvement, and integration for all Federal nuclear forensics activities. Nuclear forensics helps the U.S. Government to hold fully accountable any state, terrorist group, or other non-state actor that either supports or enables terrorist efforts to obtain or use weapons of mass destruction. 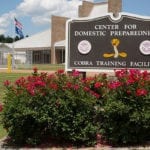