An ordnance technician at the Army Pueblo Chemical Depot in Colorado uses a lift assist to transfer a 155mm projectile onto a conveyor belt prior to destruction. Conveyors transport munitions into explosive containment rooms where energetics are removed from projectiles before the chemical agent contained within is drained and neutralized. Photo: US Army

The Pueblo Chemical Agent-Destruction Pilot Plant team in Colorado this month reached a milestone marking the destruction of nearly 300,000 155mm projectiles, which each contained 12 pounds of mustard agent.

Chemical agent destruction operations in Colorado began in March 2015 and are scheduled to be completed by 2023, said Walton Levi, site project manager. More than 780,000 munitions were in the original chemical weapons stockpile in Pueblo.

Mustard agent is a blister-producing chemical weapon contained within three types of munitions stored at the Pueblo Chemical Depot, each named after the diameter of its shell: 155mm projectile, 105mm projectile and 4.2-inch mortar round.

This marks the end of the 155mm projectile campaign at PCAPP and the safe elimination of approximately two-thirds of the original chemical agent stored at the depot, said Levi. ”We proudly completed this campaign ahead of schedule — and while implementing strict, new protocols to keep our workforce safe amid the coronavirus pandemic,” noted Levi.

Since the late 1960s, the U.S. government has been taking steps to reduce and eliminate the U.S stockpile of chemical weapons. This was reinforced by a presidential directive and the U.S. ratification in 1997 of the Chemical Weapons Convention, an international treaty that calls on all member nations to destroy their chemical weapons and production facilities.

To comply with the treaty, the U.S. is destroying its last remaining chemical weapons stockpile.

”Our ultimate goal is keeping the workforce and community safe from these World War II-era weapons,” said Army Col. Michael Cobb, commander of the depot. ”We use the utmost care and follow strict safety procedures when delivering the munitions from their storage igloos to PCAPP.”

As of Aug. 14, the destruction of 1,673.5 tons of mustard agent in the U.S. has been reported to the Organization for the Prohibition of Chemical Weapons, an intergovernmental organization whose goal is to eradicate chemical weapons worldwide, said Abaie.

How the Process Works

Under the close supervision of trained operators, the pilot plant uses dozens of automated systems to disassemble and drain the munitions and thermally heat the drained munition bodies. The liquid agent is neutralized, and the product, hydrolysate, is then fed to living microorganisms in a process known as biotreatment.

Water is recycled at the pilot plant and the remaining salt is shipped off-site to a permitted treatment, storage and disposal facility. The plant is equipped with a robust pollution abatement system made up of 12 carbon filter banks that filter out particles before air from inside the plant is released back into the atmosphere.

During the next several months at PCAPP, technicians will retrofit the plant’s robots and systems to begin processing the next munitions campaign, which are the 105mm projectiles.

The other remaining chemical weapons facility in the U.S. is PCAPP’s sister site, the Blue Grass Chemical Agent-Destruction Pilot Plant near Richmond, Kentucky. BGCAPP is safely destroying 523 U.S. tons of the nerve agents VX and GB (sarin) and mustard agent stored in rockets and projectiles at the site, Levi said.

An important element in the process of safely destroying chemical weapons is the coordination and collaboration with the local communities. The Chemical Stockpile Emergency Preparedness Program works closely and supports state and local governments and the Federal Emergency Management Agency to educate, prepare and protect communities surrounding the stockpile sites, Levi said. 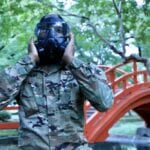 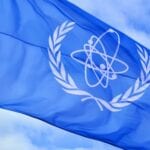