Scientists at the U.S. Army Edgewood Chemical Biological Center (ECBC) proved it is possible to teach an old dog ‘new tricks’ through adding the ability to detect explosive materials with the Joint Chemical Agent Detector (JCAD).

Since there are over 56,000 JCADs already in the hands of warfighters across all four services, ECBC set their sights on expanding the system for explosives detection.

“The JCAD is already fielded and in the hands of our warfighters, so that made it a good candidate to start with,” said Gretchen Blethen of ECBC’s Point Detection Branch.

The effort was not without challenges. The original JCAD is designed to detect vapors; however, explosive materials are usually low vapor pressure solids. ECBC researchers, working in collaboration with Smiths Detection, had to figure out how the JCAD could detect solid explosive materials, without changing the hardware or original intent of the detector.

Many of the emerging chemical threats and explosives share the challenge of presenting little to no detectable vapor for sampling. By conducting research into the detection of solid explosive residues, we have learned valuable lessons that are equally important for detecting nonvolatile solid and liquid chemical agent residues as well,” said Dr. Augustus W. Fountain III, Senior Research Scientist for Chemistry.

To make an ordinary JCAD a JCAD Chemical Explosive Detector (JCAD CED), scientists added two on-demand vapor generators: a calibrant and a dopant. The dopant changes the chemistry of the detector so that it can detect explosives easier. The existing rain cap is replaced with one with a new inlet. Once in place, scientists wipe any surface using the probe swab, which then retracts back into inlet.

Push a simple button and the probe swab tip with the explosives sample heats up to a certain temperature, vaporizing the explosive residue.

“Within the Army, there is no other automatic, near real-time explosives detector at this time. There are many explosives detectors, but not ones that are dual-use and automatic,” said Charles Harden, Ph.D. Leidos contractor to ECBC’s Point Detection Branch. “The best part is that the technology is already out in the field, and warfighters have been trained on this equipment. All we’re doing is introducing small add-ons that will have a big impact.”

The swab allows users to pick up residue from any surface often invisible to the naked eye and analyze it. The explosive residue can be transferred and easily detected using the instrument. JCAD CED can already detect roughly a dozen compounds including TNT, RDX and EGN.

Moving forward, ECBC plans to increase the number of detectable compounds, determine the amount of explosives that can be detected, and develop a Concept of Operations. 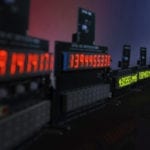