Topics in this issue include Japan’s nuclear reactors back in action, chemical weapons in the 50s, the Next Generation Chemical Detector program, terrorism alert system, the Wassenaar Arrangement, botulinum neurotoxin research consortium, and U.S. maritime security.

Japan has restarted its second nuclear reactor since the Fukushima disaster in 2011 shut down the country’s nuclear energy program. The reactor is scheduled to be fully operational and producing power by October 21. About 100 protestors opposing the restart gathered outside of the Sendai nuclear power plant, chanting slogans. CNN >>

The concept of using chemical or biological weapons on a massive scale is nothing new, however how militaries test those weapons has always proven to be a bit more difficult. In the 50s however, when weapons like these were deemed ‘allowable’, it seems the US Navy had something of a ‘gung ho’ approach to weapons testing, it used its own people.  Huffington Post >>

ECBC Designing Future Capabilities for All Phases of Matter

Preparing for a future yet to be imagined requires a scientific approach focused on designing research that is persistent in experimentation. The U.S. Army ECBC is working with 10 industry partners, lending its laboratories and subject matter experts, to test prototypes for the Next Generation Chemical Detector (NGCD). Edgewood Chem Bio Center >>

The U.S. has never used the National Terrorism Alert System, a two-level system that replaced the oft-derided color-coded terrorism alerts installed after 9/11 to spread the word about potential attacks from abroad. But after a “homegrown violent extremist” killed five service members in Chattanooga, Tenn. — and amid the expectation of more terrorist-inspired attacks — the Department of Homeland Security wants to revise and jumpstart the system. Defense One >>

Export Controls at the Crossroads

India’s acceptance into the missile control regime was expected to be the first step in having India join the four main export control regimes, the others being the Wassenaar Arrangement, the Australia Group, and perhaps most significant, the Nuclear Suppliers Group. Italy’s effective veto of India’s application highlights flaws in the current governance arrangements associated with export controls in general. Bulletin of the Atomic Scientists >>

In 1995, a domestic terrorist killed 168 people and injured hundreds more when he used a fertilizer bomb to blow up a federal building in Oklahoma City. The Department of Homeland Security has since stated that terrorists could target any of the tens of thousands of facilities throughout the United States that house hazardous chemicals—like the ammonium nitrate fertilizer used in that bombing. Government Accountability Office >>

The Nuclear Regulatory Commission’s “cyber security roadmap” spells out how nuclear plant licensees were implementing 2009 cyber regulations, as well as NRC’s approach to assessing cyber needs of other licensees. During Phase 1, facilities implemented controls to protect their most significant digital assets from the most prevalent cyber-attack vectors. This phase was completed in December 2012, and inspections of Phase 1 actions will be done late this year. U.S. NRC >>

The consortium is for the Development of Medical Countermeasures for Botulinum Neurotoxin Intoxication Focused on Therapeutics and Neuroregenerative Medicines, a multicenter program in which directed research projects are submitted, evaluated and selected to sponsor a network of collaboration amongst researchers. Global Biodefense >>

Ken Rutherford, professor of political science and director of JMU’s Center for International Stabilization and Recovery, gave a talk last Thursday about his advocacy for victims of landmines, a pressing issue for many countries still dealing with the effects from war. Rutherford is a fervent advocate for victims of landmines and he is a landmine accident survivor himself. In 1993, when he was on trip in Somalia, he and two other of his team members were traveling in a city with no United Nations presence. James Madison University >>

U.S. Army Size and Defense Expenditures Relative to Other Nations

Online Attacks on Infrastructure Are Increasing at a Worrying Pace

Over the last four years, foreign hackers have stolen source code and blueprints to the oil and water pipelines and power grid of the United States and have infiltrated the Department of Energy’s networks 150 times. NY Times >>

Time for a U.S. Maritime Security Strategy for Europe

The U.S. and its NATO allies need a new strategy for the maritime domains in and around Europe, which are contested and congested in ways that were almost unthinkable a few years ago. Fortunately, there is a good model available: the Defense Department’s new Asia Pacific Maritime Security Strategy. Defense One >>

The Psychology of Nuclear Restraint

In his new book, Five Days in August, Princeton historian Michael Gordin asks, did the United States really believe before Hiroshima and Nagasaki were bombed that this act would serve as a silver bullet, the war-winning weapons that it came to believe they were after the event? His answer is no. Bulletin of the Atomic Scientists >>

The United States should seize the initiative and soon mount a massive experiment to search for a hypothesized type of nuclear decay that is possible only if an elusive, nearly massless particle called the neutrino is—weirdly—its own antiparticle. Science >>

Almost 1,000 people were poisoned here in July and August — at least two fatally — by so-called designer drugs, concocted by chemists to mimic the psychoactive effects of marijuana, cocaine, LSD and other illicit substances. NY Times >>

The American Industrial Hygiene Association has signed a Memorandum of Understanding with the AIHA Registry Programs, LLC and the Society for Chemical Hazard Communication. This agreement commits all parties to developing and maintaining the safety data sheets (SDS) registry program for chemical hazard communication and environment health professionals. Occupational Health & Safety >>

The Nuclear Verification Technology That Could Change the Game

Antineutrino detection is an existing technology that, if political and diplomatic hurdles are overcome, could be put in place before the 10-year ban on Iranian enrichment R&D is lifted. And fully developed over the long-term, it holds great promise for monitoring similar deals in the future, and for reinforcing nuclear non-proliferation worldwide. Bulletin of the Atomic Scientists >> 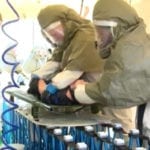