The Homeland Security Department wants startups to help Customs and Border Protection use drones for surveillance and tracking. As part of a broader effort to connect with commercial businesses in Silicon Valley, DHS is hosting an industry day focused on unmanned aircraft systems. The July 29 event, meant to lure nontraditional contractors into selling to the government, is slated to be held in Menlo Park, a well-known hub for tech giants and venture capital firms. Nextgov >>

During the collapse of the Soviet Union, tens of thousands of sealed radioactive sources were abandoned in the former Soviet republics. These orphan and legacy sources, originally intended for use in fields such as cancer treatment, sterilization, seed irradiation, and weld testing, pose a wide range of threats, from public safety to domestic and international security. These risks were illustrated in early 2015, when criminals attempted to sell a cesium-137 source to undercover Moldovan police officers posing as Islamic State middlemen. James Martin Center for Nonproliferation Studies >>

It’s hard to learn about the Bomb in the media. Other issues have a higher call on public attention and press coverage, like counter-terrorism in Pakistan and China’s rise in India. Journal articles in publications devoted to security topics reflect other priorities: Over the past ten years nuclear security research has only featured in 14% of the articles in Strategic Studies published by the Islamabad Strategic Studies Institute and in only seven percent of the articles in Strategic Analysis, published by India’s Institute for Defence Studies & Analyses. The Wire >>

Physical Cryptography for Secure Accounting of the World’s Nuclear Arsenals

Verifiably reducing the number of nuclear weapons in the world will require more than international diplomacy; a scientific breakthrough is needed. To date, all nuclear arms control treaties have been limited in a peculiar way: Participants cannot determine that the warheads of other countries being counted are real. Now researchers have developed a method using nuclear resonance fluorescence, a new form of single-pixel tomography, and careful attention to the information content of physical processes. The proposed solution marks a major advance in a search for a workable method that has been ongoing since 1963. Phys.org >>

The Royal Navy said it has launched an immediate investigation after HMS Ambush was involved in the “glancing collision” while submerged off the coast of the British territory. There is “some external damage” but no crew members were injured, it added. BBC News >>

Dramatic video has been released of a man who police say stands accused of building a chemical weapon inside a Walmart store in Oxnard. The man wearing all black is initially seen in the security footage from June 18 blending in like any other shopper. But, authorities say, he didn’t come to the store to shop, but to build a chemical weapon. CBS Los Angeles >>

This week’s Republican National Convention has reminded me again that knowing your nuclear triad is important. Some of the malcontentedness after last month’s Brexit referendum is a reminder that the Scottish Nationalists don’t like nuclear weapons, triad or not. Earlier this month, Congressman Adam Smith, ranking member of the House Armed Service Committee, wants new thinking on nuclear weapons, including “downsizing” its ambitions for recapitalization. The National Interest >>

Initially, U.S. leaders thought the ideological motivation for East-West nuclear tensions had disappeared with the collapse of communism.  But even after Vladimir Putin began rebuilding Russia’s military forces and signaling a desire to regain lost influence, Washington continued to treat the prospect of nuclear conflict as remote. The National Interest >>

Money ‘Not an Issue’ for Future of Air Force Nuclear Deterrent

The Air Force will get the funding it needs for nuclear modernization, a top service official said July 21. “The money is not the issue,” Lt. Gen. Jack Weinstein, Air Force deputy chief of staff for strategic deterrence and nuclear integration, said at a speech hosted by the Air Force Association in Arlington, Virginia. “The president has always supported nuclear modernization in the budget.” National Defense >>

Theresa May is Lying Over Trident. Or At Least I Hope She Is

In one of her first acts as prime minister, Theresa May sat down to write to the commanders of our four nuclear submarines, laying out what she would like them to do in the event of a nuclear attack. These handwritten instructions – the so-called letters of last resort – are locked in the boats’ safes, only to be opened if an attack has knocked out all contact with government. No one has ever opened one. The Guardian >>

America’s nuclear deterrent is considered foundational to the nation’s defense, and the 1970’s-vintage Minuteman III fleet of 450 missiles, spread across silos in five states and three sprawling bases, is its cornerstone.  That foundation, however, is crumbling. Defense officials warn that the Minuteman is long overdue for replacement, especially since Russia—even as its conventional forces saw ups and down over the last 25 years—has never stopped modernizing its strategic forces. China’s strategic forces have advanced tremendously in just the last decade. North Korea’s missiles may soon be a credible threat. Air Force Magazine >>

‘The Graveyard of the Earth’: Inside City 40, Russia’s Deadly Nuclear Secret

Codenamed City 40, Ozersk was the birthplace of the Soviet nuclear weapons program after the second world war. For decades, this city of 100,000 people did not appear on any maps, and its inhabitants’ identities were erased from the Soviet census. Today, with its beautiful lakes, perfumed flowers and picturesque tree-lined streets, Ozersk resembles a suburban 1950s American town – like one of those too-perfect places depicted in The Twilight Zone. The Guardian >> 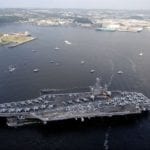