The C-IED COE is an International Military Organization, multinationally manned and funded by contributions from 9 sponsoring NATO nations.

Domecq stressed the important work done so far by the EDA on C-IED and called for increased cooperation between institutions and stakeholders on this crucial issue.

In 2010, the EDA invested one million euros to establish a Counter IED exploitation deployable laboratory. That initiative grew into the Multinational Technical Exploitation Laboratory (MNTEL) which was successfully deployed to Afghanistan from 2011-2014.

MNTEL subsequently led to the establishment of the Joint Deployable Exploitation and Analysis Laboratory (JDEAL) – a capability which presents a real opportunity to tackle technical exploitation in general, and exploitation of Improvised Explosive Devices in particular.

“The pressing operational need to Counter IEDs has been a major driver for these developments. EDA’s projects have aimed to generate exploitation capabilities that directly improve the understanding, identification and exposure of threat networks. And they were successful,” Domecq stressed.

To be even more effective in the future, stakeholders have to cooperate and share their knowledge and expertise, Domecq noted. “C-IED demands a strong Interagency approach, as do exploitation issues. This agreement has definitely paved the way for others to come. Just opening new lines of action and cooperating with stakeholders enables Institutions to work better and faster together, and of course to broaden the scope for further opportunities.”

“Exploitation disciplines should no longer be a national secret. Proficiency in this domain needs to be improved, shared and deployed by organizations and nations – to fail to do so leaves the door open for those who wish to do us harm. Exchange of experts and training capabilities must underpin the fight against insurgent networks and hybrid hazards and this event provides the best avenue to do so,” concluded Domecq. 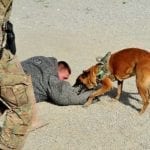