Lance Cpl. Enrique Puentes Jr. dons his gas mask as the grueling Okinawa sun beats down on his Mission Oriented Protective Posture suit. He looks at his Japanese counterpart as a Japanese Decontamination Truck eases onto the contaminated airstrip. Meanwhile, a Japanese Ground Self-Defense Force member pours water on his rubber suit to cool off as he scans the area for threats. The water turns to steam as it hits the hot pavement.

The U.S. Marines and JGSDF service members pushed through the heat to complete the mission here during a joint study, July 13, 2017. 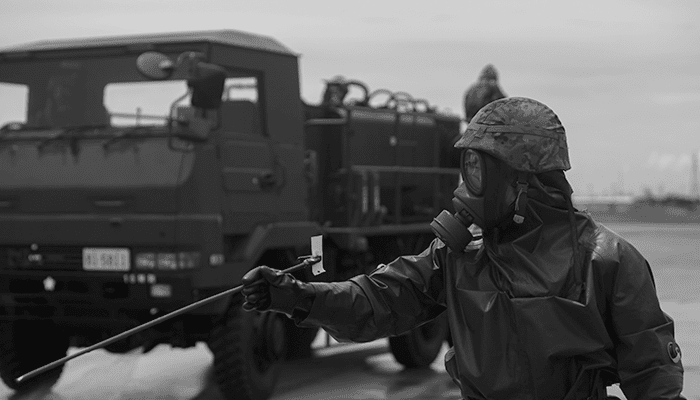 “They were right there with us the whole time, doing exactly the same thing that we were doing,” said Gunnery Sgt. Apollo Thomas, the CBRN MWHS-I platoon sergeant.

Day two involved going over different decontamination procedures of the JGSDF and U.S. Marines. The Marines showed the soldiers how they decontaminate troops and equipment while the JGSDF demonstrated how to decontaminate large areas.

On the third day, the Marines and JGSDF soldiers explained how they would defend a fixed site, such as a base or building, using sensors and debriefed the airstrip joint study.

“CBRN attacks take thousands of lives when they go off, so being ready for it and knowing how to deal with it — and being able to be seamless in doing it — is always vastly important,” Chethan said.

The Marines and JGSDF soldiers were integrated into one force, combining U.S. and Japanese equipment while utilizing both countries’ methods of decontamination.

“The most difficult part was just surviving the heat,” said Puentes, a native of Tampa, Florida. “But it was rewarding getting to see the different ways we can work together with our Japanese counterparts.” 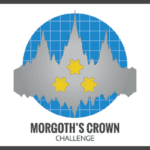 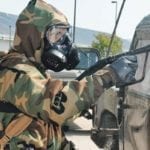