Workers prepare to insert a canister holding explosives and diagnostic equipment into a 31-meter deep hole in preparation for the SPE-6 experiment. Credit: NNSA

A chemical explosives equivalent to 2,200 kilograms of TNT was detonated 31 meters underground this week at the Nevada National Security Site (NNSS).

The test was part of on-going Source Physics Experiment (SPE) research efforts, and the sixth in a series of experiments designed to improve detection and characterization of underground nuclear explosions and to help develop an advanced capability for the United States to monitor low-yield nuclear testing.

By conducting the experiments near the location of previous underground nuclear tests, National Nuclear Security Administration (NNSA) and partner researchers were able to better compare data from conventional and nuclear explosions. This helps to improve the U.S. capability to differentiate low-yield nuclear test explosions from other seismic activity, such as mining operations and small earthquakes.

“The Source Physics Experiment series and NNSA’s ongoing research and development at our National Laboratories are key to strengthening our national security. These efforts advance technical solutions for treaty monitoring by the United States and its partner nations,” said Anne Harrington, NNSA Deputy Administrator for Defense Nuclear Nonproliferation.

Researchers on the project collect and analyze seismic, infrasound, optical, acoustic, geospatial, and magnetic data with technologies such as high-resolution accelerometers, high-speed video, drone- and ground-based photogrammetry, as well as light detection and ranging (LIDAR) and synthetic aperture radar (SAR). Seismic data from the SPE series are shared on the Incorporated Research Institutions for Seismology website at http://www.iris.edu/hq/ for researchers around the world to analyze.

SPE-6 marks the end of Phase I of the SPE series. These six experiments were conducted in granite or “hard” rock at different depths and explosive weights. Phase II of SPE will focus on explosions in softer, less structured rock called alluvium. These different SPE phases allow researchers to determine the generic role that geology plays in affecting seismic waves generated by underground nuclear explosions. The five explosions planned for Phase II will be conducted over the next two years. 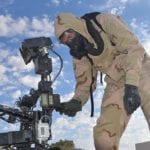