This beautiful Golden retriever Rudy is being trained by the U.S. Army to use his nose to find human remains. Photo by U.S. Army

Researchers at Duke University have developed an artificial “robot nose” device made from living mouse cells that officers could use instead of dogs for detecting explosives, drugs and other contraband.

The researchers developed the prototype based on odor receptors grown from the genes of mice that respond to target odors, including the smells of cocaine and explosives.

It turns out, there are a couple of very big differences between testing things in a lab dish and testing them in an actual nose.

“This idea of an artificial nose has been present for a long time,” said senior study author Hiroaki Matsunami, a professor of molecular genetics and microbiology in the Duke School of Medicine. “The receptors were identified in the 1990s, but there are significant technical hurdles to produce all these receptors and monitor the activity so that we can use that in an artificial device.”

“E-noses” that exist now use various chemical compounds to detect smells instead of receptor stem cells, Matsunami said. He said those devices are “not as good as a trained dog.”

“The idea is that by using the actual, living receptors, maybe we can develop a device similar to animals,” Matsunami said. “Nobody has achieved that yet, but this study is moving toward that goal.”

The first step of the study was to identify the best odor receptors to respond to target odors like cocaine or marijuana.

The researchers created a liquid medium primed with molecules that could light up from reactions. Next they copied about 80 percent of the odor receptors from mice, and mixed those receptors with seven target odor chemicals in the medium.

They measured the resulting luminescence and chose the best-performing odor receptors for the second part of the study, which monitored receptor activation in real time.

Previous research had done this by exposing selected receptors to odor chemicals in a liquid. But there are several differences between the petri dish and the nose. For one, we rarely submerge our noses into liquid baths of odor chemicals. Instead, our noses detect smells from wafting perfumes or stenches borne on the air. And our noses are full of mucus.

So, for the second half of the study, which was supported by the National Institutes of Health and the Defense Advanced Research Project Agency RealNose Project, they attempted to mimic how we use our noses by exposing odorants to vapors and a few enzymes.

The researchers tested the receptors they had identified against two odor vapors for this study.

“We only tested two of them in the paper, but it’s showing the proof of principle of how it can be used,” Matsunami said.

The researchers hope they can fine-tune the device to test all receptors against many different smells.

“We have a panel of receptors so we can monitor how different receptors respond differently to various smells, including ones that are similar to each other in chemical structure or ones that might be related to real-world use, like something associated to explosives or drugs,” Matsunami said.

The researchers also tested various enzymes that one might find in mucus to see how they aided or impeded reactions. This process is more true-to-life than vapor molecules directly interacting with odor receptors.

Mucus is an unknown frontier in understanding how we smell. Reconstructing the key components of nasal mucus may be the next step toward building an artificial nose, according to the paper.

“It’s not like our paper will be immediately applied to a portable device used in the airport soon, but this is an important step forward to show that it is possible,” Matsunami said.

Their work was recently published in Nature Communications. 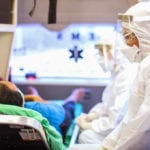 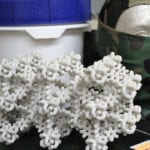