A chemistry department at a British university was recently evacuated after a student made the known explosive, TATP.

The chemical, tri-cyclic acetone peroxide, or TATP, was made by accident as the product of a chemistry experiment. But although the TATP in question came as an unwelcome surprise – the Ministry of Defence was forced to carry out a controlled disposal – there are many labs around the world which do design and make explosives for interest and application. Here are five of these non-nuclear chemicals which all explode via the rapid release of gas.

One of the most commonly known explosive chemicals is trinitrotoluene, or TNT, which has featured extensively in video games and films. It is often mistaken as dynamite, perhaps fuelled by examples of confusion in popular culture, such as AC/DC’s song TNT with lyrics such as “I’m TNT. I’m dynamite”.

TNT is a yellow solid and was first produced as a dye in 1863. It doesn’t explode spontaneously and is very easy and convenient to handle, so its explosive properties were only discovered some 30 years later by German chemist Carl Häussermann in 1891.

TNT can even be melted and poured into vessels without so much as a flicker of excitement but it will explode with the help of a detonator – and with a great deal of force, since the nitro groups in the molecule rapidly turn into nitrogen gas. This makes it ideal for use in controlled demolitions, where the explosive can be planted and detonated when planned (for example by miners), making it a relatively “safe” explosive. It’s also used as a “standard measure” for bombs, so the “explosiveness” of other chemicals is often measured relative to TNT.

The chemical TATP belongs to a group of molecules named peroxides, which contain weak and unstable oxygen-oxygen bonds, and that are not found in TNT. This means that TATP is a lot less stable and more prone to spontaneously exploding.

TATP is also known as the “mother of satan” and with good reason – its explosions are known to be about 80% as strong as TNT, but the substance is much harder to handle. A firm shock or knock is enough to trigger an explosion, which means it’s quite easy to accidentally blow yourself up in the process of making it – and good reason to evacuate your chemistry department if it is accidentally made.

TATP has also received a lot of media attention because it is easy to make and has been regularly used in improvised explosive devices (IEDs) associated with terror attacks such as the London 7/7 bombings in 2005.

Since TNT doesn’t contain any unstable nitrogen-nitrogen bonds, RDX packs more power – but it is often mixed with other chemicals to produce different effects, such as making it less sensitive and less likely to explode unexpectedly. It is also commonly used in controlled demolition of buildings.

One of the most powerful explosive chemicals known to us is PETN, which contains nitro groups which are similar to that in TNT and the nitroglycerin in dynamite. But the presence of more of these nitro groups means it explodes with more power. However, despite its powerful explosions, it’s quite difficult to get this chemical to detonate alone, and so it is usually used in combination with TNT or RDX.

Its relatively low toxicity and medicinal properties as a vasodilator (it can widen blood vessels) also mean that it is used to treat angina – but don’t worry, you won’t explode.

Among the least stable nitrogen-explosives is aziroazide azide which has 14 nitrogen atoms, with most of them bonded to each other in successive, unstable nitrogen-nitrogen bonds – making them prone to explosion. You would never see these kinds of molecules in nature due to their incredible instability, but they were made in a German research lab by Thomas Klapötke’s group as recently as 2011.

Attempts to touch or handle this chemical (and some may say so much as even look at) can cause it to detonate, breaking those bonds and turning them into multiple molecules of rapidly expanding nitrogen gas. The reaction creates a huge amount of heat and so only tiny amounts of this chemical have ever been synthesised for testing – which have blown up inside expensive pieces of analysis equipment on many occasions. You’d have to be pretty crazy to create large amounts and explains why it hasn’t yet found any use.

This list is by no means comprehensive – there are plenty of other explosive chemicals at the disposal of chemists and industrialists. But these are among the most famous and dangerous non-nuclear chemicals to date. You’ll be glad to know that many of them would be more difficult to make by accident than TATP – and we can usually predict and avoid the reactions that can produce them.

Laura Finney is a PhD Candidate at the University of Nottingham Centre for Doctoral Training in Sustainable Chemistry where she is completing an organic synthesis project. This article is courtesy of The Conversation. Read the original article. 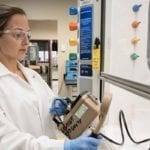