CBRNE SOCMED - Just Another Day at the Office 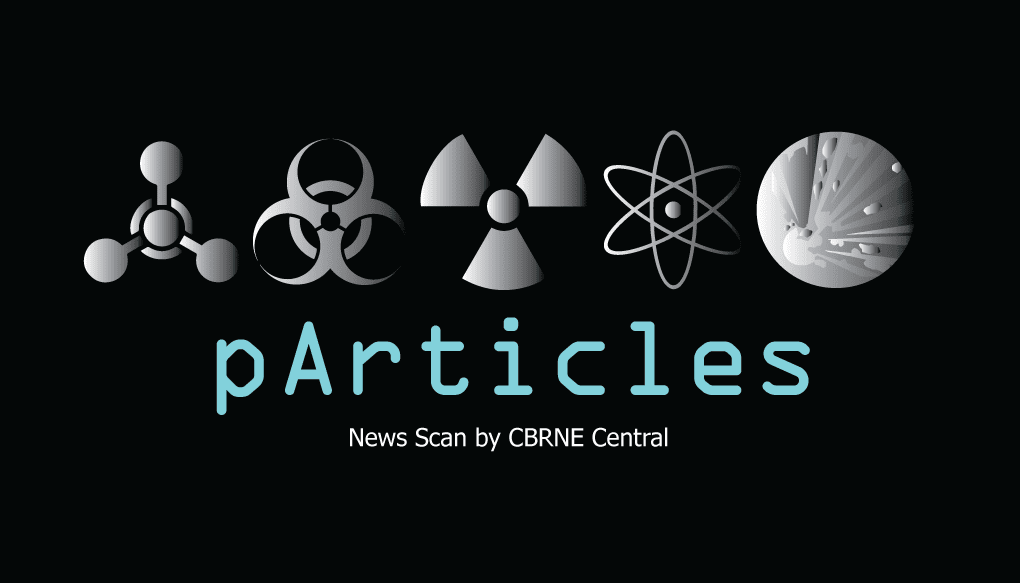 U.S. Strategic Command recently passed the leadership role in counter-proliferation of weapons of mass destruction mission to SOCOM, a move that has SOF leaders scrambling to figure out where it fits into this complex mission. We Are The Mighty >>

The new federal blueprint for U.S. nuclear weapons policy unveiled at the Pentagon this month could mean more work and millions more in federal dollars for Sandia and Los Alamos National Laboratories in New Mexico, but local critics contend that it puts the nation’s nuclear complex on a more wasteful path. Albuquerque Journal >>

Combating the Spread of WMD: A Success Story for the U.S.-E.U. Partnership

This week, a leaked report by U.N. experts provided strong indications that North Korea has been illegally providing components and expertise to support Syria’s chemical weapons program. This is not the first time that U.N. experts have made similar allegations. In previous reports they have revealed that North Korean shipments to a Syrian government agency responsible for the country’s chemical weapons program had been intercepted by a third country. War on the Rocks >>

As the slaughter continues in Syria’s Eastern Ghouta—a besieged area on the outskirts of Damascus that is home to some 400,000 people—the obvious question becomes even more urgent: How can this abomination be stopped? The Atlantic >>

Summary of the first meeting of the temporary working group aiming to review the science and technology relevant to investigations such as those mandated under Articles IX and X of the Chemical Weapons Convention. This would include science and technology for the validation and provenancing (i.e. determining the chronology of ownership, custody and/or location) of evidence, and the integration of multiple and diverse inputs to reconstruct a past event. Organisation for the Prohibition of Chemical Weapons >>

Determinations Regarding Use of Chemical Weapons by North Korea

The United States Government has determined that the Government of North Korea has used chemical weapons in violation of international law or lethal chemical weapons against its own nationals. The following is notice of sanctions to be imposed as required by law. Federal Register >>

US, European Leaders Warn ‘No Impunity’ for Toxic Gas Attacks in Syria

The United States and European powers are vowing a “firm response” to those responsible for recent alleged toxic gas attacks in Syria’s eastern Ghouta, where hundreds of civilians have died in recent weeks. Voice of America >>

Several FDA-approved antidotes are available for cyanide poisoning, but they have severe limitations. Researchers have developed the first analytical method to evaluate a new cyanide antidote, dimethyl trisulfide (DMTS), and a method of quickly detecting a substance associated with exposure to sulfur mustard. Phys.org >>

DHS To Put First Responder Tech to the Test

The Homeland Security Department is looking for ways emerging technologies can keep first responders better connected when disaster strikes. The DHS Science and Technology Directorate recently opened applications for the agency’s Harris County Operational Experimentation, a chance for groups to prove their technology’s worth in improving safety and effectiveness of firemen, paramedics and other rescue workers on the ground. Nextgov >>

DomPrep Journal shares experiences and lessons learned from those who have firsthand accounts of disaster incident response and want to ensure that any existing gaps are closed before similar situations arise within their communities or elsewhere. Domestic Preparedness >>

Our Role in Radiation Disaster Preparedness

Given the relative availability of medical and industrial radioactive sources that have been lost or misplaced around the world, the instability of certain countries that possess nuclear weapons, and the potential for terrorism networks to create weapons, it is clear that either a nuclear incident or a radiological incident with radiological dispersal or exposure is more likely than ever. International Journal of Radiation Oncology >>

Hospitals around the United States—and around the world—are addressing security, safety and liability concerns by replacing blood irradiators that use cesium-137 with FDA-approved x-ray technology. NTI provides resources to prepare you to join them, with answers to technical questions and information on how to get financial support to take this important step. Nuclear Threat Initiative >>

The Use of Field Triage in Disaster and Mass Casualty Incidents

Mass casualty incident (MCI) triage and the use of triage tags to assign treatment priorities are not fully implemented despite emergency medical services (EMS) personnel training during drills and exercises. Prehospital Emergency Care >>

The Next Generation of Bomb Disposal Robots

The Office of Naval Research is looking for improvements in three areas: the manipulators or arms, the effectors or hands, and the sensors the robot uses to understand what it is handling. The robot technician must be able to detect, locate, access, identify, render-safe and recover explosive threats from both land and underwater environments. Defense Systems >>

Technology to Screen for Explosive Vests Coming to Penn Station

TSA will start testing the screening equipment this week. TSA has been working on the stand-off explosive detection units since 2004 with transit agencies like Amtrak and New Jersey Transit. The machines, mounted on tripods, screen people at a distance without slowing them down. Several versions are being evaluated. CBS New York >>

The threat of homemade explosives (HMEs) is not new. From the Oklahoma City bombing in 1995, to the “shoe bomber,” London underground bombings, “underwear bomber,” and attacks in Paris and Brussels in the 2000s, the threat is ever changing. Not only do post-incident crime scenes present danger to responders until secondary devices have been ruled out, but also makeshift laboratories where the bombs are made. Handheld explosives trace detection (ETD) equipment can help responders quickly determine on-scene threats, like Triacetone Triperoxide (TATP) and react appropriately and expediently. Domestic Preparedness >>

The National Nuclear Security Administration is looking for a woman-owned small business to prevent cyberattacks targeting nuclear materials, whether in a facility or in transit. Nextgov >>

DARPA has announced its SIGMA+ program, an expansion of the existing SIGMA program, which detects radiological and nuclear materials. SIGMA+ seeks to develop new sensors and networks that alert authorities to chemical, biological, and explosives threats as well. Space Daily >>

The Department of Defense is using Barrett’s simulations—projecting the behavior of survivors in the 36 hours following a nuclear disaster—to form emergency response strategies they hope will make the best of the worst possible situation. Wired >>

Decontamination is essential when faced with the contamination of civilians, military personnel or emergency responders as the result of an accidental or intentional contamination by hazardous materials or weapons of mass destruction. But different agencies have different ways of defining decontamination beyond the basics. Firehouse >>

NUS chemists have developed highly selective and sensitive sensors based on molecularly imprinted polymers (MIPs) for the rapid onsite detection of toxic agents. Nerve agents, such as the well-known agent VX, are a class of phosphorus-containing organic compounds that severely impact our nervous system. Phys.org >>

Accidents in road tunnels have the potential to cause major casualties due to their particular configurations and confined conditions. To meet this sudden demands involving huge uncertainties and complexities, EMSs provided by fire services need to be better prepared and more efficient. Procedia Engineering >>

Why Do Entities Get Involved In Proliferation? Exploring the Criminology of Illicit WMD-Related Trade

This article seeks to provide an original approach to weapons of mass destruction (WMD)-related illicit trade by drawing on criminology and focusing on the transactional level. Specifically, the article discusses the “rational-choice” model as a way to understand an entity’s involvement in illicit trade, and considers also the limitations of this approach. The Nonproliferation Review >>

The fluorescent in situ hybridization (FISH) technique, which easily detects reciprocal translocations, is currently used to estimate doses in retrospective biological dosimetry, after suspected accidental overexposure to ionizing radiation (IR). This study of 42 cases aimed to verify the appropriateness of this assay for radiation dose reconstruction, compared to the dicentric assay, and to evaluate other limitations. PubMed >>

The cooperative effect of both NHC and metal centre has been found to destroy chemical warfare agent simulants. Choice of both the metal and NHC is key to these transformations as simple, monodentate N-heterocyclic carbenes in combination with silver or vanadium can promote stoichiometric destruction, whilst bidentate, aryloxide-tethered NHC complexes of silver and alkali metals promote breakdown under mild heating. Royal Society of Chemistry >>

In 1984, more than 700 people in The Dalles, OR, contracted Salmonella infections after followers of Rajneesh sprinkled the pathogen on salad bar ingredients in 10 local restaurants. The action was an effort to swing the results of an election. Netflix is set to premiere a series called “Wild Wild Country” this month that tells the story of the Bhagwan Shree Rajneesh and the largest bioterror attack in U.S. history. Food Safety News >>

The pangs are inevitable for Tyler Gulliksen. He has his days in the sunshine, playing golf on some beautiful courses in his crisp, new University of San Diego golf shirt. And then he thinks about the men in his military “community,” those who dispose of bombs as a career choice, who are stationed in some far-flung part of the world, putting themselves in mortal danger. San-Diego Union Tribune >>

Nokia’s smart jacket for first responders were a big hit at the 2018 Mobile World Congress. Not only does it have the potential to help cops or firefighters during emergencies with features like a removable heart rate monitor and body camera — it looks like it came straight out of a menswear runway show, too. Engadget >>

Related Topics:
Up Next