The evacuation order has been lifted for the town of Naraha in Fukushima prefecture, allowing residents to permanently return to their homes there. Naraha, located within 20 kilometres of the damaged Fukushima Daiichi nuclear power plant, is the first of seven municipalities that were fully evacuated to have its order removed. World Nuclear News >>

How Many US Troops Were Killed By Iranian IEDs in Iraq?

Japan considered its nuclear power plants safe and was therefore not prepared for the March 2011 accident at the Fukushima Daiichi plant, International Atomic Energy Agency (IAEA) director general Yukiya Amano has said in a comprehensive report on the accident. World Nuclear News >>

Later this fall (possibly this month) the first new Borei-class (sometimes spelled Borey) nuclear-powered ballistic missile submarine (SSBN) is scheduled to arrive at the Rybachiy submarine base near Petropavlovsk on the Kamchatka Peninsula. Federation of American Scientists >>

Lenoir City, TN, September 3 – Unexploded bombs, artillery shells, and other munitions are legacies of war that can remain deadly for years, decades – even more than a century. When legacy explosives are found, modern techniques and professionals are in the best position to protect people and property. Government Security News >>

An Australian governmental committee has recommended that uranium sales to India should only be allowed to proceed after its concerns about non-proliferation, nuclear regulation and safeguards have been addressed. World Nuclear News >>

Federal nuclear energy regulators have decided to end a study they had started to determine the risks of cancer near nuclear power plants. The Nuclear Regulatory Commission (NRC), which had hired the National Academy of Sciences to conduct the study, said Tuesday that it determined that the cost and time of the second phase of its research would be too high given the agency’s budget restraints. The Hill >>

Upgrades at US Nuclear Bases in Europe Acknowledge Security Risk

Security upgrades underway at U.S. Air Force bases in Europe indicate that nuclear weapons deployed in Europe have been stored under unsafe conditions for more than two decades. Commercial satellite images show work underway at Incirlik Air Base in Turkey and Aviano Air Base in Italy. The upgrades are intended to increase the physical protection of nuclear weapons stored at the two U.S. Air Force Bases. Federation of American Scientists >> 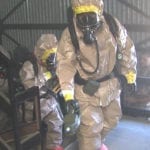