Topics in this issue include nerve agent antidotes, BioWatch RFI, rumors of nuclear weapons in Crimea, and planning for mass patient chemical decon.

Several senior lawmakers have expressed alarm by Russia’s collapsing economy, fearing some of the nuclear power’s atomic arsenal could fall into the wrong hands. While officials say there’s no immediate reason to think Russia’s weapons could be sold off to the highest bidder or stolen, republican senators have stated intentions to hold hearings next year on what Moscow is doing to keep its nukes safe. The Hill >>

During some of the bloodiest days of US combat in Afghanistan and the roadside bomb threat there, the Pentagon’s Joint IED Defeat Organization (JIEDDO) “improperly collected” intelligence on US citizens and corporations, a Pentagon Inspector General (IG) report has found. Defense News >>

Rumors About Nuclear Weapons in Crimea

The news media and private web sites are full of rumors that Russia has deployed nuclear weapons to Crimea after it invaded the region earlier this year. Many of these rumors are dubious and overly alarmist and ignore that a nuclear-capable weapon is not the same as a nuclear warhead. Federation of American Scientists >>

The Chemical Defense Program (CDP), under the Department of Homeland Security Office of Health Affairs (OHA), and the Office of the Assistant Secretary for Preparedness and Response (ASPR) have published the document titled “Patient Decontamination in a Mass Chemical Exposure Incident: National Planning Guidance for Communities.” Federal Register >>

The Department of Homeland Security (DHS) has issued a new Request for Information (RFI) in support of the BioWatch program to determine the current state of technologies that can provide a cost-effective, portable biological identifier capability to the program. Global Biodefense >>

KY: Home to the Last of America’s Chemical Weapons

The U.S. has destroyed 90 percent of its chemical weapons – but thousands of aging rockets, laced with deadly nerve agents, remain in storage near Richmond.  The Blue Grass Army Depot holds 523 tons of chemical agent, and will be the last of the country’s nine storage sites to destroy its stockpile. WMKY Kentucky >>

Military teams patrolling dangerous urban environments overseas and rescue teams responding to disasters such as earthquakes or floods currently rely on remotely piloted unmanned aerial vehicles to provide a bird’s-eye view of the situation and spot threats that can’t be seen from the ground. But to know what’s going on inside an unstable building or a threatening indoor space often requires physical entry, which can put troops or civilian response teams in danger. DARPA >> 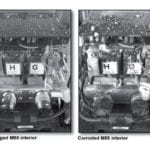