Topics in this issue include sampling and analyzing nerve agents, Pueblo Chemical Depot scheduling delays, and a virtual tour of the Manhattan Project.

The Army says a plant that will destroy the nation’s largest remaining stockpile of mustard agent won’t start operating until September instead of this spring as planned. Officials said Thursday that mechanical problems cropped up during tests at the Pueblo Chemical Depot outside Pueblo. The Gazette >>

Nerve agents are highly potent inhibitors of the enzyme acetylcholinesterase (AChE), inhibition of which results in cholinergic hyper-stimulation and a continual transmission of nerve impulses that prevents contracting muscles from relaxing. Clinical presentation of nerve agent poisoning includes hypersecretion and miosis which can lead to seizures, respiratory failure, and death; observations supporting the exposure to nerve agents were seen in videos posted online of victims of the Ghouta incident. ACS CHED CCCE >>

The Department of Homeland Security (DHS) Office of Procurement Operations is seeking to advance development of a fabric technology to provide real-time initial decontamination after exposure to chemicals. The fabric must be able to be incorporated into a duty uniform garment, work under extreme weather conditions (e.g., variability in temperature, humidity, and precipitation), and ideally also be fire resistant. Global Biodefense >>

A new, free mobile application titled “Los Alamos: The Secret City of the Manhattan Project,” is now available for download from the Apple store. The app allows users from any location around the world to experience the environment in that pivotal time during the Second World War when a group of scientists came to Project Y, the wartime-era code name for Los Alamos, to develop a weapon unlike any other in human history — a weapon to harness the power of the atom. HSNW >>

New biological research on gene sequencing, synthesis and analysis “are likely to enable revolutionary advances in medicine, agriculture and materials,” IARPA’s posting says — but they also “have intensified security concerns around the accidental or deliberate misuse of biotechnologies.” NextGov >>

The U.S. THAAD system is a powerful anti-missile tool, but wouldn’t be effective in defending against a North Korean nuclear attack coming as part of a barrage of conventional warheads, a U.S. analyst said Monday. Korea Times >>

According to NFPA’s recently released U.S. Firefighter Fatalities report, a total of 68 firefighters died while on duty in the United States in 2015, representing the fourth time in the past five years that the total number of deaths has been below 70. The number of volunteer firefighter deaths was the second lowest total every reported (32 deaths). NFPA Blog >>

U.S. President Barack Obama’s call for a “moral revolution” in humanity’s approach to nuclear weapons was the highlight of his poignant recent visit to Hiroshima, while Hillary Clinton and Donald Trump similarly agree on the pressing need to secure loose nuclear material. The Diplomat >>

The world was a more peaceful place when a newly sworn-in President Barack Obama pledged to “aggressively pursue” a global ban on nuclear arms tests. But as his term winds down, a working test-ban treaty remains a dream and some of the loudest voices out of Washington are hostile. ABC News >>

Needle in a Haystack: How North Korea Could Fight a Nuclear War

Much less coverage and attention has been paid to how the North Korean leadership might actually use nuclear weapons in a live, operational setting. The avoidance of discussion on this issue is hardly surprising; analysis of nuclear combat theory and doctrine is somewhat of a taboo in the strategic community, almost certainly borne of the ideas of mutually-assured-destruction (MAD) and measurements in megadeaths that were derived from the conclusions reached by Cold War thinkers and analysts. 38 North >>

A new international radiation monitoring information system (IRMIS), launched by the International Atomic Energy Agency (IAEA), will collect and display radiation monitoring data, enabling countries to respond rapidly to such emergencies. This data maps the areas of potential impact that can assist countries to take appropriate protective actions in an emergency. HS Today >>

The U.S. Department of Agriculture Animal and Plant Health Inspection Service Veterinary Services, National Veterinary Stockpile (NVS) is the nation’s repository of critical veterinary supplies and equipment. It exists because of concerns that terrorists could release animal diseases of catastrophic proportions that would deplete State and local response inventories, and prevent unaffected States from providing significant help for fear of the threat crossing their borders. Global Biodefense >>

The Stockholm International Peace Research Institute (SIPRI) today launches its annual nuclear forces data, which highlights the current trends and developments in world nuclear arsenals. The data shows that while the overall number of nuclear weapons in the world continues to decline, none of the nuclear weapon-possessing states are prepared to give up their nuclear arsenals for the foreseeable future. SIPRI >>

Officials said crews are working to contain a fire at a chemical plant. Bradley Kinlaw with Bladen County Emergency Management said the fire was reported this morning at Tiger Products, also referred as Cape Fear Chemicals, on US 701 near Elizabethtown. He said crews began to work to contain the fire around 9:30 a.m. WWAY TV 3 >>

In May, President Barack Obama’s historic visit to Hiroshima reignited discussions of whether the United States actually needed to drop atomic bombs to force Japan to surrender at the end of World War II. What these debates didn’t touch on was that the U.S. military prepared to use other horrifying tactics, including starvation induced by chemical weapons. The National Interest >>

Lawrence Livermore National Lab (LLNL) researchers took to the New York City subway system May 9-13 to study how a surrogate for a biological agent, such as anthrax, might disperse throughout the nation’s largest rapid transit system as a result of a terrorist attack or an accidental release. Global Biodefense >>

The retrieval of mixed waste from the underground chambers at the decommissioned Berkeley nuclear power plant in the UK is progressing. Clearance of these vaults will enable the two Magnox units to enter a period of long-term passive storage. World Nuclear News >> 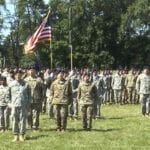 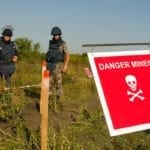