Topics in this issue include the role of the military in public health crisis management; chemical weapons destruction facilities; a retrospective on the Ebola panic in the U.S.; and bioreactors in a a briefcase.

Foreign military personnel played a crucial role in stemming the Ebola outbreak in Liberia and Sierra Leone, researchers said on Monday, but warned against treating their intervention as a blueprint for future humanitarian crises. Reuters >>

The plant will employ more than 1,000 when it begins the neutralization and destruction of weapons in 2020. The final weapons at the Blue Grass Army Depot are scheduled to be destroyed in 2023. Lexington Herald Ledger >>

New imaging technology that can see the radiation fields emitted in an operating nuclear reactor has been developed by researchers in the UK. Inspired by cats’ eyes, the camera technology could provide real-time monitoring of reactor cores. World Nuclear News >>

What were the worst predictions a year ago, and did they come true? t’s been a year since peak “Fearbola” in the United States—the out-of-proportion panic at the possibility of Ebola cases in this country. At that time, the outbreak was increasing dramatically in Sierra Leone, Guinea, and Liberia. Thomas Eric Duncan was being treated for his Ebola infection in Dallas, under the care of nurses Amber Vinson and Nina Pham, and he died Oct. 8, 2014. Slate >>

The Islamic State of Iraq and the Levant’s (ISIL) ability to acquire the materials required to develop and weaponized chemical agents creates a need for countermeasures that target their chemical agent development and housing capabilities. HDIAC >>

Use of Chemical Weapons Must Be Condemned: India

During a debate on WMD, the First Committee of the General Assembly called on the international community to be vigilant on non-state actors and terrorist groups seeking and using chemical weapons and said the use of such weapons anywhere and by anyone must be condemned. Business Standard >>

Adversarial technological advances are expected to be wide-ranging and challenging for the U.S. Army to defend against. In order to ensure the U.S. Army maintains its technological and competitive edge, it is important to categorize the potential for adversary advantage by capability portfolio management and equipment areas identified by the Long-Range Investment Requirements Analysis (LIRA) process. ISN ETH Zurich >>

In 2010, soon after Haiti was devastated by an earthquake, a team from MIT Lincoln Laboratory collected and analyzed information to help the U.S. Southern Command (USSOUTHCOM), the lead military agency responding to the crisis, effectively dispatch vital resources, including food, water, tents, and medical supplies, to the victims of this disaster. The laboratory’s capabilities in advanced imaging also aided relief operations. Phys.org >>

Soldiers on the battlefield will soon be able to manufacture life-saving biologics in under eight hours using a portable briefcase-sized kit. The project, sponsored by Thermo-Fisher, Ohio State and Latham Biopharm, aims at warzone use but the tech could also be applied to public quarantines, personalized medicine, and ultra-low cost vaccine manufacturing. BioPharma Reporter >>

Syrians and Iraqis have been fleeing their countries’ civil wars for years, but the refugee crisis grabbed international headlines last month when it forced itself on the European scene. Over 500,000 Syrian asylum seekers and thousands of Iraqis have gone to Europe as of September 2015, and that number is expected to climb dramatically. Brookings >>

The risk of an improvised nuclear bomb being detonated in a foreign city has “increased substantially” according to Dr. Hamish de Bretton-Gordon, noting that the extremist jihadist group already had chemical weapons such as mustard gas and it is “only a matter of time” before it manages to launch an attack capable of destroying a substantial part of a city. Express >>

The passenger rail company obtained $275 million of protection to insures against damage to its infrastructure in the Northeast Corridor from a natural disaster’s storm surge, wind, or earthquake. Occupational Health & Safety >>

The Mexican authorities “learned some hard lessons” from botched or inadequate responses to earlier catastrophes, said Richard Olson, the director of the Extreme Events Institute at Florida International University in Miami. “It looks like they got this one right.” NY Times >>

House Homeland Security Committee Chairman Michael McCaul held a hearing this week to examine worldwide threats and homeland security challenges, including the growing threat America and the West face from ISIS and other terrorist groups, the actions of Russia and Iran in Syria, the impact of the Syrian refugee crisis in Europe on America’s security, homegrown terrorism, cybersecurity, and other threats to the homeland. Homeland Security Committee >>

Firefighters Burn Off Propane Leak – Is Your Team Prepared?

The Westport Fire Department responded to a report of a “gas leak,” and upon arrival, firefighters located an underground propane tank leaking gas adjacent to the driveway.  Firefighters set up a precautionary hose line and metered the area. Hazmat Nation >>

A two year, $300,000 grant from the National Institute of Standards and Technology (NIST) to characterize the impact of recent changes in the National Fire Protection Association (NFPA) 1981 Standard on Open-Circuit Self-Contained Breathing Apparatus (SCBA) mask material after they are repeatedly exposed to common fireground thermal conditions. Homeland Security Today >>

A plan to transport thousands of gallons of radioactive nuclear waste into the United States via the Peace Bridge could be delayed. On Wednesday, the House of Representatives approved a bill that would require the U.S. Department of Homeland Security to provide a complete threat assessment on the transport of CBRN materials in the U.S. and across borders. WKBW Buffalo >>

Remember the last time a new nuclear power plant opened up in the U.S.? If not, that’s excusable. It wasn’t in this century. It was Watts Bar in Tennessee, which opened for business in May 1996. CityLab >>

What happens to a nuclear facility or a site after it served its purpose? This question will be the focus of a major IAEA event taking place in Madrid, Spain from 23 to 27 May 2016. IAEA >>

Nuclear Weapons: The Pride of Pakistan

Pakistan’s development of tactical nuclear weapons leaves it more vulnerable to the possibility of theft or unathorized launch.  In addition, the fact that Pakistan and India view nuclear weapons very differently and have no ongoing dialogue about these issues means that the risk of miscalculation remains high. Carnegie Endowment >>

Why We Still Need a Nuclear-Armed Cruise Missile

In a recent op-ed in the Washington Post, former Defense Secretary William Perry and former defense acquisition official Andrew Weber called on President Obama to defund the Air Force’s nuclear-armed Long Range Standoff (LRSO) missile, reiterating many of the talking points detailed two years ago. The strategic environment has only worsened since then, making the need for LRSO even more acute. War on the Rocks >>

How Do You Find Plutonium? Go to Nuclear Inspector School

No names. No pictures. No direct conversation. And don’t touch the plutonium. Those were the ground rules before NPR was allowed a rare opportunity to see nuclear inspectors learning their craft. The inspectors came from the International Atomic Energy Agency, the world’s nuclear watchdog. NPR >>

In our latest FAS Nuclear Notebook we estimate that Pakistan now has 110-130 warheads in its nuclear arsenal. This is an increase of about 20 warheads from the 90-110-warhead level we estimated in our previous Pakistani Notebook in 2011. Federation of American Scientists >>

Nuclear weapons have long captured the imagination of writers and filmmakers as a symbol of humanity’s incredible yet terrifying potential, of its intelligence, hubris, and vulnerability. The general public might not always view comic books and graphic novels as a serious medium, yet they offer a fascinating perspective on the nuclear age. Bulletin of the Atomic Scientists >>

Bruce Power and Nordion are to work together to secure the long-term supply of high specific activity (HSA) cobalt-60 under a memorandum of understanding signed by the two companies. While cobalt-60 is widely used for sterilizing medical supplies, HSA cobalt-60 – also referred to as medical-grade cobalt – is used in cancer treatments, particularly the precise treatment of brain tumors. It is produced in a limited number of nuclear reactors globally. World Nuclear News >>

When Frederick County firefighters upgraded to the 800 megahertz radio frequency several years ago, not all of the county’s closest neighbors followed suit. As a consequence, county firefighters found themselves unable to communicate directly with stations in Jefferson County, West Virginia, Franklin County, Pennsylvania, and Washington County, all of which stayed in the lower, 400 MHz range. Emergency Management >>

The U.S. government wants in on the resurgence of developments in contactless biometric technology, seeing smart applications of such devices in places such as airport security. But before device deployment, officials need to make sure the scanners and sensors actually do what they say they do—safely and accurately. AFCEA >>

Fighting terrorism across the globe involves a dangerous paradox: the better it works, the less we appreciate the need for it. Defense One >> 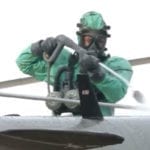 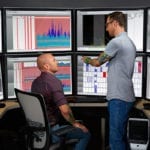