Topics in this issue include radioactive contaminants in coal ash, chemical weapons destruction, nuclear plant operations in Japan post-Fukushima, and the fight against nuclear terrorism.

Imagine this: You’re strapped into a bomb suit, and you have to make it 500 meters to a potentially explosive device. The whole time, your team is fighting the enemy to make sure you can get there safely. Once – and if – you do, there’s no one else there but you, your thoughts and that device – and you have to defuse it. No pressure, right? DoD Live >>

10 Years Later: Reflections on the Medical Response to Hurricane Katrina

While every disaster serves as a learning experience, and much work remains to be done, in the intervening years since Hurricane Katrina, we have witnessed demonstrable improvements in our ability to handle large disasters and maintain responsive, high functioning healthcare and public health systems, and we hope that trend continues. The Bifurcated Needle >>

No Cause for Murder Charges in Arafat’s Death, French Investigators Say

More than two years after accusations arose that Palestinian leader Yasser Arafat’s 2004 death was the result of polonium-210 poisoning, French judges say there isn’t enough evidence to support the claim that Arafat was murdered. When Arafat died in France in November 2004, doctors said he had suffered a stroke. But his widow, Suha, did not agree. And in 2012, she filed a murder case, after traces of polonium-210 were found on Arafat’s belongings. NPR >>

Echoed-shouts filled the room as rapid arm movements set the Marines into motion; initiating a race against time. With tightly shut eyes, they held onto one last breath and reached for their masks. The Marines hastily positioned the equipment on their faces, fastening the straps; pulling them tight and securing the masks in place. U.S. Marines >>

Japan’s nuclear power industry continues to suffer long after the 2011 Fukushima disaster. Legal troubles related to the accident and stricter safety standards imposed by the government in the aftermath of the calamity are preventing a rebound in the country’s nuclear power capacity, according to a survey by Reuters. Vice News >>

In 2012 a team of Swiss scientists found elevated levels of polonium-210 and lead-210 in tissue samples taken from Yasser Arafat’s exhumed body, but French and Russian scientists who examined the same tissue samples did not find abnormal radiation levels and dismissed the Swiss findings as resulting from methodological errors. HSNW >>

Army leaders want to keep citizens informed about the chemical weapons destruction planned in Central Kentucky and will be holding a public meeting in the region on 9 September. WTVQ >>

The Fight Against Nuclear Terrorism Needs Global Cooperation–and the IAEA

While no institution is perfectly seated to preside over the effort to combat nuclear terrorism, the International Atomic Energy Agency, with its expansive reach and decades of experience, is well suited to lead the charge. The Global Initiative to Combat Nuclear Terrorism—a multinational collaborative effort founded by the United States and Russia—can act as a diplomatic vehicle to promote greater cooperation between the world’s largest nuclear powers. Bulletin of the Atomic Scientists >>

Inside the confines of a dingy, shadow-filled room where small amounts of light peeked in from grimy windows, smoke filled the air as those inside the room began to feel the burn and realized they were in for a long morning. Fort Hood Sentinel >>

Budgetary Turmoil at the Department of Defense from 2010 to 2014

The large and sudden sequester cuts of 2013 and the government shutdown in that same year constitute the best known events. Other instances are less well known but contributed to disruption. They include creating plans to shut down DOD on five different occasions, creating two budgets for the same year on several occasions because of uncertainty about the ultimate size of the appropriation, a major out-of-cycle planning process, and accommodating budgets that were six months late in enactment during two of the past five years. Brookings >> 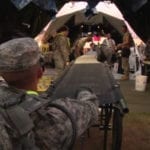