British prime minister David Cameron said yesterday that the government security review has warned that ISIS and al-Qaeda are trying to get their hands on chemical and nuclear weapons. Cameroon referred to the security review in a speech in which he called on Members of Parliament to approve U.K. air strikes in Syria within a week. Homeland Security News Wire >>

The hunt for the ultimate weapon began in January 2014, when Abu Omar, a smuggler who fills shopping lists for the Islamic State, met a jihadist commander in Tal Abyad, a Syrian town near the Turkish border. The Islamic State had raised its black flag over Tal Abyad several days before, and the commander, a former cigarette vendor known as Timsah, Arabic for ‘‘crocodile,’’ was the area’s new security chief. NY Times >>

At Least 20 Killed in Attack on Mali Hotel

The Uneven Geography of Terrorism

Only a handful of countries—Iraq, Nigeria, Afghanistan, Pakistan, and Syria—accounted for more than three-quarters (78 percent) of worldwide deaths attributed to terrorism in 2014, according to the newly released findings of the Global Terrorism Index, produced by the Institute for Economics and Peace. CityLab >>

A Pakistani man has been sentenced to 40 years in prison over a failed al-Qaida bomb plot on the New York City subway. A federal jury in Brooklyn convicted Abid Naseer in March following a trial that featured spies in disguise, evidence from the raid on Osama bin Laden’s compound and the defendant’s questioning of an admitted co-conspirator. The Guardian >>

As the temporary Pentagon organization created nearly 10 years ago to combat roadside bombs transitions into a smaller, permanent agency, the improvised explosive device problem has only proliferated and grown white-hot as forces continue to fight in Iraq, Afghanistan and elsewhere. Defense News >>

A bomb has exploded outside the headquarters of Greece’s business federation, in the first major attack since Alexis Tsipras assumed power in January. The blast, triggered by a timer attached to the device, did not cause injuries but immediately raised concerns over security in Athens. In a country labouring under its worst economic crisis for decades, security forces fear a barrage of similar incidents may be in the offing. The Guardian >>

The National Weather Service says an instrument that fell from the sky, prompting a Philadelphia bomb squad response, weighed about a pound and had been launched with a weather balloon about 165 miles away. The Guardian >>

The Paris bombings sent shivers through law-enforcement agencies around the world — but to Lt. Gen. Michael Shields, they’re just another innovation by skilled ISIS bombmakers. As head of the Pentagon’s Joint Improvised-Threat Defeat Agency, or JIDA, Shields tracks such developments — and is rushing to help Iraqi Security Forces analyze and report on the bombs they encounter. Defense One >>

Seventeen people were killed over the weekend in Nigeria and Cameroon after explosives strapped to five girls were detonated, officials said Monday. Nigerian police, who blamed Boko Haram for the attacks, said one girl’s explosives detonated on Sunday evening at a military checkpoint in Nigeria’s northeastern city of Maiduguri. Al Jazeera >>

IS Releases Photo of Bomb It Says Downed Russian Jetliner

The Islamic State group has released a photo of a bomb hidden in a soft drink can that it said had brought down a Russian passenger jet over Egypt last month, and it also announced it had killed hostages from Norway and China. In Homeland Security >>

A suicide attack on Saturday by suspected members of Nigerian armed group Boko Haram killed at least 10 people over the border in the far north region of Cameroon, security sources said. Boko Haram has mounted numerous attacks in Cameroon, Chad, Niger and Nigeria this year and is turning the border region near Lake Chad into a war zone, the United Nations refugee agency said last month. Al Jazeera America >>

Nigeria: Device That Can Sniff Out Suicide Bomber Underway

Suicide bombing may soon come to an end across the world if a device currently being developed by researchers sees the light of the day. More than 50 people were killed in the northern Nigerian cities of Kano and Yola last week by suicide bombers believed to be members of the outlawed Boko Haram group. All Africa >>

U.S. Official Says Use of Chemical Weapons is Routine in Syria

The use of chemical weapons in the Syrian civil war is becoming routine, a U.S. official said in The Hague on Monday, calling on members of the global chemical weapons body to collectively condemn their use. Washington Free Beacon >>

CW Incidents Alleged by the Syrian Government: An Industrial Chemical as Likely Cause?

The Syrian Deputy Minister for Foreign Affairs and Expatriates, who also heads the Syrian CWC National Authority, submitted Note Verbale 150 to the Technical Secretariat on 15 December 2014. The document alleges 10 separate CW incidents in four Damascus neighborhoods between April and September 2014 that resulted in 92 casualties, all among military personnel. The Trench >>

Isis is “aggressively pursuing the development of chemical weapons”, creating a team dedicated to research and experiments, according to Iraqi and US intelligence officials. Iraqi officials have raised concerns that a large area controlled by extremists, since the group overran parts of Iraq and Syria last year, has left authorities largely in the dark about Isis activities. Independent >>

4 Officers Taken to the Hospital After Hazmat Situation in Boston

Four Boston Police officers were taken to the hospital Thursday morning after they were exposed to a man who may have been cooking meth. The incident happened around 5 a.m.at 182 West Brookline St. “He had a product used to make meth on him, so officers involved in that arrest were taken to BMC as a precaution.” Hazmat Nation >>

For a man who saved the world, or at least helped ensure that Adolf Hitler never got hold of a nuclear bomb, 96-year-old Joachim Ronneberg has a surprisingly unheroic view of the forces that shape history. NY Times >>

As we walked among the empty houses of Zalesye, the last thing I expected to see was an inhabitant. But suddenly there she was. The sole inhabitant of the village, she is one of about 100 older people, mostly women, still living in the Chernobyl exclusion zone — 1,000 square miles of Ukraine that were evacuated in 1986 after a catastrophic accident at a nuclear power plant. NY Times >>

Plutonium in the Hills: How Do You Keep Nuclear Secrets Buried Forever?

Beginning one morning in August 1949, Soviet scientists repeatedly made this very patch of steppe as hot as parts of the sun. Four years later, the nearby blast of the first Soviet hydrogen bomb—proof the world had entered the thermonuclear age—was 26 times larger than the bomb that had fallen on Hiroshima. In all, 456 explosions were set off here, 340 of them underground after a ban on surface testing in 1963. VICE >>

At the Nanoscale, Concrete Proves Effective for Nuclear Containment

2109 would require the Federal Emergency Management Agency (FEMA) to develop a plan to reduce the costs of administering programs that provide grants and technical assistance in areas affected by major disasters. Congressional Budget Office >>

EPA Plans to Classify Hundreds of Additional Chemicals as Safe

U.S. environmental regulators plan to add at least 100 chemicals to its database of substances deemed safe in each of the next several years.Emma Lavoie, a toxicologist for the Environmental Protection Agency’s Safer Choice program, told a conference in Virginia last week that the 100-chemical threshold “is our base for the next few years” and that the review could expand to some 300 chemicals annually. Chem.info >>

Nuclear Energy in the U.S. 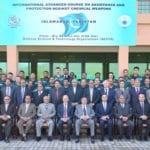