Topics in this issue include critical infrastructure training; Ukraine-Russia and the nuclear stage; collaborative for explosives detection technology and more.

The Wrong Move: Adding Nuclear Weapons to the Russia-Ukraine Conflict

India is busily negotiating bilateral agreements with its nuclear trading partners to assure them that the uranium they supply to India will not end up in Indian nuclear weapons. This is a standard practice for states involved in nuclear cooperation, yet India has set out to weaken the information sharing provisions in its agreements with Canada, the United States, and soon Australia. All three supplier states support India’s bid for membership in the Nuclear Suppliers Group (NSG), but India’s behavior here hardly supports New Delhi’s contention that it is like-minded. The Diplomat >>

The UAE decided to embark on nuclear power in 2008, becoming in 2012 the first ‘newcomer’ country in 27 years to start constructing its first reactor. Three of the four reactors planned are already under construction. How did they do it so fast? What are the experiences and challenges faced so far? IAEA >>

How to Make a ‘Smart’ Phone ‘Undumb’ in a Disaster

The first apps to consider allows chatting with those who are in the immediate area. This app is particularly valuable after a disaster if the cell towers are down, overloaded, or an Internet/Wi-Fi connection is not available. One app to consider for this purpose is FireChat, which works off a peer-to-peer mesh network that is formed when devices are within 200 feet of each other. Domestic Preparedness >>

For several years, nuclear researchers have designed, fabricated and tested a host of novel nuclear fuels and fuel cladding materials (enclosed tubes that house the fuel in a reactor) in laboratories across the U.S. Now, testing of promising fuels and materials with enhanced accident tolerant characteristics in a U.S. nuclear test reactor is commencing. HSNW >>

It has become popular among military and congressional leaders to argue that the United States has had a “procurement holiday” in nuclear force planning for the past two decades. “Over the past 20-25 years, we took a procurement holiday” in modernizing U.S. nuclear forces, Major General Garrett Harencak, the Air Force’s assistant chief of staff for strategic deterrence and nuclear integration, said in a speech yesterday. Harencak’s claim strongly resembles the statement made by then-commander of US Air Force Global Strike Command, Lt. General Jim Kowalski, that the United States had “taken about a 20 year procurement holiday since the Soviet Union dissolved.” Federation of American Scientists >>

Radiation-related cancers are not the only health threat to former nuclear plant workers, according to a new published report from the Center for Construction Research and Training and Duke University. The report finds that people who worked at a DOE nuclear site have a higher risk of death from “all causes, all cancers”, including the asbestos-related cancer mesothelioma. Global Biodefense >>

President Barack Obama will propose spending cuts for many federal programs in the 2016 budget request he’ll send to Congress on Monday, but not for nuclear weapons. Quite the contrary, Obama’s administration is proposing to go on a nuclear weapons spending spree. This is an expensive and profound mistake, and one that ignores the limited contribution that nuclear weapons make to U.S. security. Defense One >>

Hundreds of contaminated facilities left in the wake of 50 years of nuclear weapons production and energy research during the Cold War and Manhattan Project are still years away from being cleaned up, according to a recent audit report by the Department of Energy’s Inspector General. HS Today >>

The Department of Energy’s plan for building a national nuclear waste repository at Yucca Mountain, in Nevada, is technically sound, but several steps remain before construction can be recommended. DOE still needs to acquire rights to the land on which Yucca Mountain sits. Those rights, which are currently held by several other federal agencies, must be redesignated for the repository by Congress. The department must also secure water rights to the surrounding area from the State of Nevada. Chemical & Engineering News >>

The Los Alamos National Laboratory is leading a collaboration of strategic public and private partners focused on the innovations in and education about explosives detection technologies. The Los Alamos Collaboration for Explosives Detection (LACED) site serves as a virtual gateway to world-class expertise and capabilities designed to counter all types of explosives threats, predominantly through enhanced detection capabilities. HSNW >>

At the height of the epidemic, there were 2,800 DoD personnel deployed to West Africa under Operation United Assistance. The majority of DoD personnel in West Africa will now return home. Today, around 1,500 of them are already back to their duty stations and nearly all will return by April 30. Global Biodefense >>

Egypt and Russia have agreed to build a nuclear power plant together and officials from both countries have signed a memorandum of understanding on the proposed project. Egypt’s president, Abdel-Fattah el-Sissi, announced the plan during a joint press conference in Cairo with Russian President Vladimir Putin who is on a state visit to Egypt. World Nuclear News >>

Back in October, when President Obama tapped Ron Klain to coordinate the U.S. response to the  frightening Ebola outbreak, many observers — you know who you are — were outraged that the White House had picked a lawyer and former chief of staff to Vice President Biden for the job — as opposed to a doctor or nationally known figure. Washington Post >>

The IAEA has launched a new project aimed at benefiting from the experiences gained from the challenges of decommissioning and remediating damaged nuclear facilities. The project is one of the responses of the Agency towards increased nuclear safety under the IAEA Nuclear Safety Action Plan that was unanimously adopted by IAEA Member States following the 2011 accident at the Fukushima Daiichi Nuclear Power Plant. IAEA >>

Can a Handheld Device Detect IEDs?

The Army has issued a solicitation looking to collect information in nine areas related to detecting buried explosives, which can include landmines, metallic and non-metallic improvised explosive devices and triggering devices with non-metallic conducting components and wires. Defense Systems >> 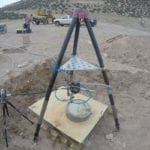 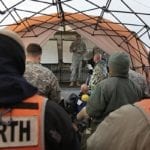