To demonstrate a system of systems to protect warfighters, the Defense Threat Reduction Agency’s (DTRA) Chemical and Biological Technologies Department (CB), in its role as the Joint Science and Technology Office, conducted the U.S. Air Force CBRN Reconnaissance and Surveillance Field Demonstration last month at Marine Corps Base Quantico.

This Advanced Technology Demonstration (ATD) is part of the Integrated Early Warning campaign that is aligned with a larger chemical/biological defense program to develop advanced threat detection, understanding, and communication of CBRN defense capabilities.

The ATD showed great promise in providing a versatile and transportable CBRN capability that significantly improves the ability to conduct CBRN reconnaissance and surveillance.

Like previous demonstrations for Army and Marine Corps applications, such as Perceptive Dragon, this ATD showcased USAF Emergency Management personnel using remote chemical and radiological sensors along with handheld and wearable sensors, all integrated into a common architecture on a Utility Terrain Vehicle (UTV), that enables real-time data communications displayed on tablets that provided a common operating picture.

Much of the backbone of these capabilities can be used for all types of CBRN threats.

Airmen used CBRN sensors mounted on a small Unmanned Aerial Vehicle, along with handheld CBRN sensors and wearable Physiological Status Monitors plus a Heads Up Display while executing realistic and operationally relevant scenarios. The integrated sensors provided real-time data sharing and data display that significantly improved timeliness and accuracy in gathering detection and identification data after a CBRN attack compared to current procedures. 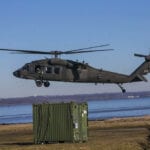 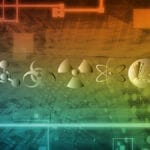