Topics in this issue include funding for pandemic preparedness, uranium contamination cleanup, and the new Homeland Security Operational Analysis Center.

Last year’s Ebola crisis was the largest in history and left more than 11,000 people dead worldwide. The Ebola outbreak may end up boosting the budget of the agency in charge of fighting pandemics, as House appropriators are proposing to give the CDC an additional $108 million next fiscal year for outbreak preparation and response and for other medical emergencies. National Journal >>

Sorry, Fareed: Saudi Arabia Can Build a Bomb Any Damn Time It Wants To

Zakaria isn’t explicit about what he believes to be the technical requirements for building a nuclear weapon, but he clearly thinks it is hard. Which was probably true in 1945 when the United States demonstrated two different routes to atomic weapons. Since then, however, the technologies associated with producing plutonium and highly enriched uranium have been developed, put to civilian use, and spread around the globe. The fact that most states don’t build nuclear weapons has a lot more to do with restraint than not being able to figure it out. Center for Nonproliferation Studies >>

Existing wearable technology, such as body cameras, have limitations on what information they can provide, and often, cannot transmit that data in real time. One objective of the EMERGE! accelerator program is to address the unique needs of the homeland security community, specifically in the fields of body-worn electrics, advanced sensors and integrated voice and data communications embedded in a responder’s gear. HDIAC >>

The regional facilities, funded via the Hospital Preparedness Program, are part of a national network of 55 Ebola treatment centers, but will have enhanced capabilities to treat a patient with confirmed Ebola or other highly infectious disease. Global Biodefense >>

The science of natural hazards is too fragmented to influence policy effectively. Sadly, hazard mitigation is not a vote-winner. It pits long-range investments against short-term political cycles — even though it is cheaper to prevent losses than to rebuild after them. Nature >>

A $47.09 billion Fiscal Year 2016 appropriations bill was passed out of the Senate Subcommittee on Homeland Security Appropriations which is $765 million above the FY 2015 enacted level, with a “new focus to setting goals and assessing results for the Department of Homeland Security [DHS] and its agencies,” the subcommittee announced. “The measure provides significant increases for Customs and Border Protection, the US Coast Guard and hazard mitigation activities of the Federal Emergency Management Agency. HSNW >>

Secretary of State John Kerry is “absolutely certain” that Syrian President Bashar al-Assad’s regime has launched chlorine attacks on its own people is currently compiling evidence to support it, he told reporters today. The Hill >>

The Department of Homeland Security (DHS) will host an Industry Day June 30, 2015 for an initiative to establish a contractual relationship with the private sector for the operation of the Homeland Security Operational Analysis Center (HSOAC) Federally Funded Research and Development Center (FFRDC). Global Biodefense >>

The state of Virginia has the potential to be a nuclear energy leader in the USA, according to a position paper published by the state-based Thomas Jefferson Institute for Public Policy. “Due to the amazing number of nuclear related facilities and Virginia’s critical infrastructure related to national security, it makes perfect sense that Virginia should lead the way in nuclear technology and new and innovative ideas to provide safe and secure power that is also, if necessary, off grid,” the report says, adding that underground SMRs placed in key locations at key government facilities “make total sense”. World Nuclear News >>

A strain of bacteria that “breathes” uranium may hold the key to cleaning up polluted groundwater at sites where uranium ore was processed to make nuclear weapons. A team of Rutgers University scientists and collaborators discovered the bacteria in soil at an old uranium ore mill in Rifle, Colorado, almost 200 miles west of Denver. HSNW >>

Should Nuclear Devices be Used to Stop Asteroids?

Nuclear devices aren’t required to build infrastructure or extract resources. These activities can readily be done with non-nuclear technologies, hence we do not hear the construction and extraction sectors pushing for access to nuclear devices. But there is one sector in which nuclear explosions appear to be the best option available: protection from asteroids and comets, collectively known as near-Earth objects, or NEOs. The impact of an NEO hitting Earth could be catastrophic to humanity. Bulletin of the Atomic Scientists >>

The projected growth in global use of nuclear power in the coming decades will lead to an accompanying increase in  the volume of spent fuel that needs to be managed safely.  The Director General noted that an IAEA safety guide on the storage of spent nuclear fuel, published in 2012, was being revised to take into account the lessons learned from the Fukushima Daiichi accident. IAEA >>

A high-level delegation representing the OPCW Executive Council visited the People’s Republic of China from 8-12 June 2015 to assess the status of efforts to destroy chemical weapons abandoned by Japan on the territory of China. To date, an estimated 50,000 ACW-related items have been found at over 90 locations throughout China. Of these, approximately 37,000 items have been verified as destroyed as of January 2015. OPCW >>

Lab-In-A-Box Diagnoses Diseases in the Field

Biosurveillance in the field can be difficult, if not impossible, in some cases. Without a fully-stocked laboratory for testing, fragile chemicals may not be stored properly and the risk of equipment damage is imminent. Yet, the detection of pathogens like anthrax and Ebola is required to contain outbreaks and provide much-needed treatment. Armed with Science >>

To assist doctors in diagnosing Ebola virus disease quickly, OraSure Technologies will pursue further development of an Ebola virus diagnostic test for use in a doctor’s office, hospital, clinic, or field setting that will provide results within 20 minutes. Global Biodefense >> 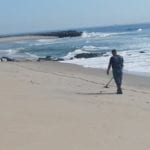