Topics in this issue include Daesh attacks with chemical weapons, counterterrorism operations in Yemen, and the Convention on the Physical Protection of Nuclear Material.

Upon arrival at the scene, firefighters found black smoke coming from the roof of the building. A manager reported that the roof was on fire in the foundry area. Officials said due to multiple vats of molten steel and aluminum in the building, roof operations were dangerous and firefighters had to be careful while fighting this fire. Fox 6 Now >>

With increasing bacterial resistance to antibiotics, the need to find new agents to tackle dangerous pathogens – many of them in hospitals – is acute. So, Cardiff University’s School of Pharmacy and Pharmaceutical Science has turned to some unlikely Welsh sources – including a few found in ancient remedies. BBC News >>

High numbers of Michigan residents continue to show traces of a toxic fire retardant more than four decades after it was accidentally introduced into the state’s food supply. Researchers from Emory University found that six in 10 people tested in Michigan today have polybrominated biphenyl in their blood at levels above the national average. Chem.info >>

Chernobyl Fatalities and the Challenges of Expert Judgment

Preparedness for and response to a nuclear emergency are in large part technical, physical undertakings. They involve equipment such as pumps, generators, containment vessels, and helicopters. But they aren’t just technical. Preparedness and response also involve, as my roundtable colleague Manpreet Sethi has pointed out, sophisticated legal instruments and organizational capacities. Moreover, as noted in the section for readers’ comments, preparedness and response involve sophisticated regulatory and training abilities. Bulletin of the Atomic Scientists >>

The South East Texas Regional Planning Commission will spend about $3.3 million on 12 new microwave towers and to equip five existing ones with the technology, which will help keep service running during severe storms or a cut fiber-optic cable, according to a May 9 article in Emergency Management. Fierce Government IT >>

Arshad Salihi, the head of the Iraqi Turkmen Front, said in a statement that the Daesh terrorist group had used chemical weapons against Turkmen town of Taza Khurmatu, south of Kirkuk. Salihi said his statement was based on a report issued Tuesday by the Netherlands-based Organization for the Prohibition of Chemical Weapons (OPCW). AA.com.tr >>

Aerial Drone Footage of a Tunnel Bomb Exploding in Syria

This aerial drone footage shows a rebel tunnel bomb exploding in Aleppo, Syria, in an attack that reportedly killed dozens of forces affiliated with the regime of Syrian President Bashar al-Assad, according to information released this week by the Twitter account World On Alert, a Germany-based organization that tracks news about the war in Syria and other conflicts. Defense Tech >>

Commercial satellite imagery of North Korea’s Punggye-ri Nuclear Test Site from May 5 suggests that Pyongyang may be preparing for a nuclear test in the near future. While the test site continues to show low levels of activity, vehicles have been spotted at what is believed to be the Command Center, located approximately 6 kilometers south of the test site. While the historical record is incomplete, it appears that vehicles are not often seen there except during preparations for a test. 38 North >>

The U.S. military has conducted four counterterrorism airstrikes against the al-Qaida in the Arabian Peninsula terrorist organization in Yemen in recent weeks, killing 10 al-Qaida operatives and injuring one, U.S. Central Command officials announced. Department of Defense >>

According to Minister Horvat, Croatia is Interested in Hungary’s Disputed Nuclear Project

The project in question is the expansion of the Paks nuclear power plant in Hungary: construction of two new 1200 MV reactors and the reconstruction of two existing blocks. The construction contract was awarded to Russian Rosatom back in 2014. The entire project is currently disputed by the EU and talks are being held by the EU’s Executive Commission to try and resolve the differences. Total Croatia News >>

Investing in Prevention: An Ounce of CVE or a Pound of Counterterrorism?

In the face of seemingly weekly terrorist attacks and reports that Islamic State affiliates are growing in number, political leaders are under pressure to take tougher action against ISIS and other violent extremist threats. Removing terrorists from the battlefield and from streets remains critical. The more challenging task, however, may be preventing individuals from joining the Islamic State or future groups in the first place. Brookings >>

After years of trying to separate fact from propaganda about North Korea’s nuclear program, American and South Korean intelligence officials say they have concluded that the country can now mount a small nuclear warhead on short- and medium-range missiles capable of hitting much of Japan and South Korea. NY Times >>

Most people are familiar with how a home pregnancy test works, but the same technology behind those devices is used in different ways and in different industries outside of life sciences, such as food and beverage, veterinary services, water quality and environmental safety. WB Journal >>

During a discussion at the Carnegie Endowment for International Peace (44:20), Professor Li Bin, a nuclear strategist at Beijing’s Tsinghua University, said he didn’t believe that China had deployed MIRVs (multiple independently-targetable re-entry vehicles), but that “on one missile there is one real warhead and many decoys” and that these decoys are in fact “missile defense countermeasures.” The Diplomat >>

A Nevada company said it will try to purchase an unfinished nuclear power plant from the Tennessee Valley Authority and use the site in northeast Alabama to produce electricity with new technology. The company has developed a system that uses electromagnetic induction energy fields to heat water indirectly and produce steam that would turn turbines and generate electricity. Seattle Times >>

Missile defenses deter countries from launching missile attacks and seek to defeat those who do. But the only existing technology designed to protect the American homeland from incoming intermediate- and long-range ballistic missiles today is the Ground-based Midcourse Defense (GMD) system, and its success in flight tests has been uneven. National Interest >>

Denuclearization Must Be Global

The Amendment to the Convention on the Physical Protection of Nuclear Material (CPPNM) entered into force on 8 May 2016. Described by IAEA Director General Yukiya Amano as “the single most important step which the world can take to strengthen nuclear security,” it expands the scope of the Convention adopted in 1979. The following FAQs explain the significance of and background to the Amendment. IAEA >>

It’s the greatest man-made threat to our lives. Since the Second World War, we have all lived under the ever-present danger of a nuclear war. And today, the kind of bombs are far more deadly than what Hiroshima or Nagasaki saw. In case a nuke does hit your city, would you survive? Find out at NukeMap. Make Use Of >>

Following the entry into force of the Amendment to the Convention on the Physical Protection of Nuclear Material (CPPNM) today, the international community must focus on its implementation, said IAEA Director General Yukiya Amano. Mr Amano also called for speedy adherence by the remaining 50 State Parties to the old Convention to strengthen nuclear security and reduce the threat of nuclear terrorism worldwide. IAEA >>

Enola Gay is a Museum Piece, Unlike the Nuclear Arms Obama Hoped to Eradicate

In a quiet hangar outside Washington, the Enola Gay still gleams as if the B-29 Superfortress that dropped the first atomic bomb in anger rolled off the production line yesterday. Despite his announcing a historic visit to the site that its payload devastated in Japan, Barack Obama’s legacy as the president who would consign all such weapons to the museum looks rather more tarnished. The Guardian >>

Four US organizations have urged the US administration to keep the position of director of nuclear energy policy at the National Security Council, saying that the so-called ‘nuclear energy policy czar’ is crucial to the coordination of US nuclear trade, security and climate policy. World Nuclear News >> 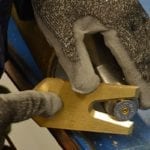