Veterans aren’t surprised when they suffer hearing loss after combat exposure to explosions, but they may be surprised to know that their vision may also suffer. To address the problem, University at Buffalo researchers who work at the Veterans Affairs Western New York Healthcare System (Buffalo VA), have received a grant from the U.S. Department of Veterans Affairs to study how that vision loss occurs and how it might be prevented. ScienceBlog >>

“This is an important capability for the Transportation Security Lab, for DHS, and for the security of our nation. To put TSL in perspective, every traveler boarding a plane from any airport in the United States, including his or her carry-on and checked baggage, is screened by explosive detection systems that were tested and certified at this facility.” HS Today >>

The Nuclear Implications of Iran-Pakistan Tensions

Tensions with nuclear-armed Pakistan may influence Iran’s calculus regarding its own nuclear program. Iran’s relationship with Sunni-majority Pakistan has often been one of restrained fear and loathing, dating back nearly two decades. In 1998, following nuclear tests by India, Pakistan conducted a series of atomic tests and thus became Iran’s sole neighbor with nuclear weapons capability. In August the same year, the Taliban forces captured the Iranian consulate in Mazar-e-Sharif and killed 11 members of its diplomatic and media corps. The Diplomat >>

Researchers at the University of California-Davis’ (UC-Davis) Western Institute for Food Safety and Security (WIFSS) are studying vulnerabilities of the U.S. agricultural system to the threats of agroterrorism. HSNW >>

As U.S. Nuclear Arsenal Ages, Other Nations Have Modernized

A new 40-foot Bulava intercontinental ballistic missile, capable of delivering an unparalleled 10 nuclear warheads, was launched by a Russian navy submarine on a test run over the icy White Sea. The weapon was a clear signal to the world that as Russia battles tightening economic sanctions intended to block Moscow’s aggressive posturing on NATO’s frontiers, President Vladimir Putin has another card to play. Chicago Tribune >>

The CDC found that Agent Orange caused a number of diseases and cancers, but not all forms of cancers were put on the conditions list at the Veterans Administration, including the kind that killed Denny. KJRH >>

India test-fired its nuclear-capable Agni-II strategic ballistic missile this week from a military base in Odisha, a defense official said. The medium-range missile with a range of over 2,000 km has already been inducted into the army, and is part of the strategic forces arsenal for nuclear deterrence. Times of India >>

Liberia is Making Progress Against Ebola but Cases Continue

New U.S.-funded Ebola treatment units and diagnostic laboratories are stoking progress on the ground in Liberia, but new cases of Ebola arise daily, U.S. officials reported today during a teleconference from the Liberian capital, Monrovia. Just under 2,200 U.S. troops are in West Africa today. DoD News >>

Seeing Clearly Through the Cloud – Assessing a Leak at Honeywell

The sound of alarms during the evening of Oct. 26 at the Honeywell Metropolis Works alerted workers and those living closest to the Metropolis, Ill., site that something out of the ordinary had occurred. The plant, a fixture in the southern Illinois river town since 1958, is the nation’s only uranium conversion plant. It converts raw uranium, or yellowcake, into uranium hexafluoride, or UF6, which is enriched at other facilities into fuel for commercial nuclear power plants. NRC Blog >>

The Last Thing the US Needs are Mobile Nuclear Missiles

Lt. Gen. James Kowalski, vice commander of U.S. Strategic Command, which oversees the military’s nuclear forces, said that the Air Force favors a new system to replace the current Minuteman III nuclear-armed missiles, and hinted that it could eventually be based on a mobile platform. This, to put it mildly, is a non-starter. Defense One >>

Vermont DEMHS took delivery of the CBRNE vehicles last week. They are designed for monitoring CBRNE incidents as well as helping in responding to wildfires. The trucks carry specialized equipment for radiological plume tracking and monitoring CBRN contaminants; they are rigged to tow everything from other vehicles to HAZMAT decontamination trailers. Green Mountain Outlook >> 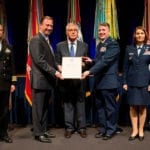