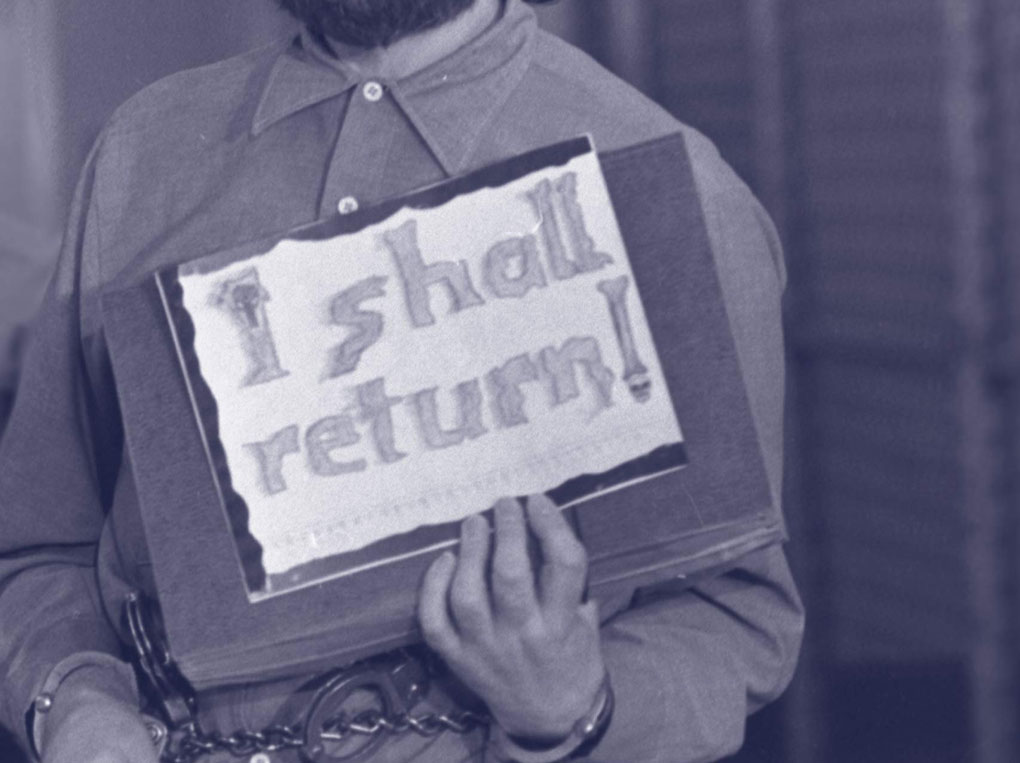 Dr. Jeffrey Simon presents a compelling history of one of the world’s first “lone wolf” terrorists to consider using Chemical, Biological, Nuclear, and Radiological (CBRN) weapons in their attacks; Muharem Kurbegovic. Dr. Simon is well poised to present the history and impact of the “Alphabet Bomber.” His writings extend beyond academic articles in such publications such as the Journal of the American Medical Association and Foreign Policy and includes other books on lone wolf terrorism such as Lone Wolf Terrorism: Understanding the Growing Threat and The Terrorist Trap: America’s Experience with Terrorism (Simon, 2019). Previously an analyst for RAND Corporation and a visiting lecturer in the Department of Political Science at UCLA, he brings a wealth of research experience to the discussion surrounding a unique but rarely studied, lone wolf terrorist.

A Terrorist Ahead of His Time

The phrase, “lone wolf” did not come into common usage to describe terrorists until about 1997 when Jeffrey Kaplan used the term in his 1997 piece Leaderless Resistance (Kaplan, 1997, p. 80). As such, when Kurbegovic began his wave of terror by conducting his first attack at the Los Angeles Airport on August 6, 1974, the term did not exist to apply to him (Simon, 2019, p. 1). Simon’s book takes its approach with this understanding; lone wolf terrorism was poorly understood and an unnamed phenomenon. Among its eight chapters, Simon informally divides his book into two parts: The first five chapters serve as a biographical journey exploring Kurbegovic’s past, work history, rise to terrorism, and ultimately his trial and incarceration. The final three chapters of the book present a broader picture of terrorism and mental health, ‘lessons learned’ and applicability of the case of the Alphabet Bomber to the larger issue of lone wolf terrorism. Simon’s goal is to inform researchers and practitioners of the details of this lesser known terrorist by providing a detailed account of Kurbegovic to lay the groundwork for the analysis of the larger dataset of lone wolf terrorists.

While not necessarily a textbook, A Lone Wolf Terrorist Ahead of His Time offers insight of use to a wide variety of individuals including scholars, practitioners, and students. By presenting detailed information about the history of Kurbegovic, his terrorist attacks and plots, and arrest, Simon provides a resource for future investigators and practitioners from which to draw information and details pertinent to their work. Of note, investigators who seek information about the ‘early’ use of chemical weapons by lone wolf terrorists, Kurbegovic’s case, as presented by Simon, would be particularly interested in Simon’s discussion. Kurbegovic’s represents a lone wolf who assimilated one of the largest caches of chemical weapon precursors to date (Simon, 2019, p. 115). While he did not realize his goal of fully developing or deploying a chemical weapon, it is apparent that his terrorist attacks were escalating, he had the necessary material, the motivation, and the knowledge to develop and deploy such a weapon. Indeed, Simon discusses his efforts and how close he was to developing sarin gas (Simon, 2019, p. 114). There is a strong belief that Kurbegovic was going to continue his violence in order to use these weapons “…until our name has been written on the face of this nation in blood” (Simon, 2019, p. 6).

Simon begins his book by providing the biographical underpinnings of Kurbegovic’s early life, family, and schooling. His early years studying and working included travel to Germany, Yugoslavia, and Canada when he eventually moved to the Los Angeles area in 1967 (Simon, 2019, p. 15). After becoming a resident alien of the United States, he readily accepted American culture but came to feel more and more that the United States heavily discriminated against immigrants, thus began his radicalization process. Kurbegovic started feeling this way after deciding to leave his chosen field of engineering to open a “Taxi Dance Hall,” a place where men paid to dance with women (Simon, 2019, pp. 24–25). Simon’s description (and interesting brief description of the history of these unique pieces of American culture) describe Kurbegovic’s desire to chase the American dream of opening your own business, but ultimately led to his radicalization due to being denied a permit to open up the dance hall (Simon, 2019, pp. 30–31).

The bulk of the book describes the evolution of violence Kurbegovic conducted with details of the police investigation and mood of Los Angeles during this time. Simon incorporates a fascinating anecdotal discussion of the interaction of Kurbegovic’s ‘relationship’ with various media outlets. He demonstrates the symbiotic relationship terrorists have with the media that is necessary to further their message as well as provide headlines for a news-hungry audience. Of interest is how Simon describes Kurbegovic’s threats of using chemical weapons and how he became self-educated in their acquisition and use. A scary proposition when considering a mentally unstable individual, and an immigrant, yet still able to teach himself how to build incendiary devices and acquire almost a warehouse full of a variety of chemical weapon precursor materials.

The historical account of Kurbegovic’s terrorist pursuits is only shadowed by the story of his almost six-year legal odyssey which ultimately put him in jail for the rest of his life (Simon, 2019, p. 127). An intelligent man, Kurbegovic used the media and courts to further his craving for the limelight and media attention. Defending himself in court, he showed an outstanding grasp of a legal system he only came to understand later in life. His ability to maneuver the legal process to argue against his competency to stand trial, then ultimately making a mockery of the prosecution and judge, tried the patience of the Los Angeles legal system (Simon, 2019, pp. 132–136).

As mentioned above, one of the unique characteristics of Kurbegovic was his desire to acquire and use chemical weapons. According to Simon, Kurbegovic’s interest in chemical weapons was more than a passing interest. He took advantage of his employer’s laboratory which provided him opportunities to conduct experiments and acquire precursor chemicals without much suspicion (Simon, 2019, p. 39). After Kurbegovic’s arrest and authorities searched Kurbegovic’s home, the list of incendiary items and chemicals included “black and smokeless powders; kerosene; liquid mercury; ammonium nitrate prills; dinitrobenzene; picric acid; mercury fulminate;…moreover, many other chemicals and devices” in addition to a small library of books such as Explosives and Demolitions, Guide to Germ Warfare, Guide to Chemical and Gas Warfare, andBooby Traps clearly demonstrating his ability to acquire the knowledge and the means to build chemical weapons (Simon, 2019, pp. 111–112).

However, what establishes Kurbegovic’s drive toward acquiring and using chemical weapons is what occurred two years later during a competency hearing; Kurbegovic announced that the authorities had not recovered all the chemicals and other items from his apartment (Simon, 2019, p. 112). We will never know why Kurbegovic admitted to knowing where the additional (and more dangerous) chemicals were in his apartment. Maybe to demonstrate how clever he was or to mock the Los Angeles Police Department or even possibly convince the court he was not competent to stand trial, but whatever the case, when officers returned to search the apartment a second time, they found a hidden room behind the medicine cabinet in the bathroom (Simon, 2019, p. 113). In that room contained red ferric oxide, picric acid, potassium permanganate, sodium chlorate, sodium peroxide, acetone, and a twenty-five-pound drum labeled “sodium cyanide,” in addition to many other chemicals (Simon, 2019, p. 114). Simon states that “…the LAPD’s bomb expert would years later tell a reporter that all but one ingredient needed to build a rudimentary nerve gas bomb had discovered in the first search…” and “Kurbegovic may have been planning future threats and actions involving the nerve agent tabun, of which sodium cyanide is a chemical precursor…” (Simon, 2019, pp. 114–115). The devastating impact these weapons would have on the citizens of Los Angeles is hard to imagine.

Like Simon’s other work, The Alphabet Bomber is exceptionally well written and researched. He offers a much-needed biography of a lesser-known lone wolf terrorist to today’s research community. Being over 40 years since Kurbegovic conducted his attacks, this book provides background on his history, personality, intellectual capability, and motives that many who are new to the field of terrorism studies might not have had time to appreciate. His assessments and conclusions regarding lone wolf terrorism fit with other findings in the field. For example, a few of the essential themes regarding lone wolf terrorists Simon discusses in Chapter 7 include the creativity of lone wolf terrorists, their propensity for using biological and chemical weapons, their communication choices, and lone wolf use of chemical/biological weapons. Comparing this with the existing literature, Schudel et al., Ackerman, and McCauley & Moskalenko all came to similar conclusions in their understanding of lone wolf terrorists (Ackerman, 2017; McCauley & Moskalenko, 2014; Schudel, Wood, & Parks, 2000). Simon’s conclusion in Chapter 7 supports these investigations and adds additional knowledge to the overall debate.

At its core, The Alphabet Bomber: A Lone Wolf Terrorist Ahead of His Time provides readers an in-depth, biographical picture of Muharem Kurbegovic, an immigrant who felt his adopted country had rejected him resulting in his turning against the government in order to change the political climate regarding immigration and sex laws. Simon provides an excellent historical account which is backed up by empirical works and relevant interviews leading to a book scholars and students of terrorism studies should include in their readings. The insights Simon provides help move the debate regarding lone wolves forward and adds relevant and timely information.

Ackerman, G. (2017). Profiling the CB Adversary: Motivation, Psychology and Decision. National Consortium for the Study of Terrorism and Responses to Terrorism (START).

Dr. Keith W. Ludwick retired after 22 years as a Special Agent with the FBI conducting counterintelligence & counterterrorism investigations and technical operations.  He currently serves as an adjunct professor for the American Military University teaching in the School of Security and Global Studies.  Dr. Ludwick earned a Master’s degree in Homeland Security from the Naval Postgraduate School and a Ph.D. in Biodefense from George Mason University.