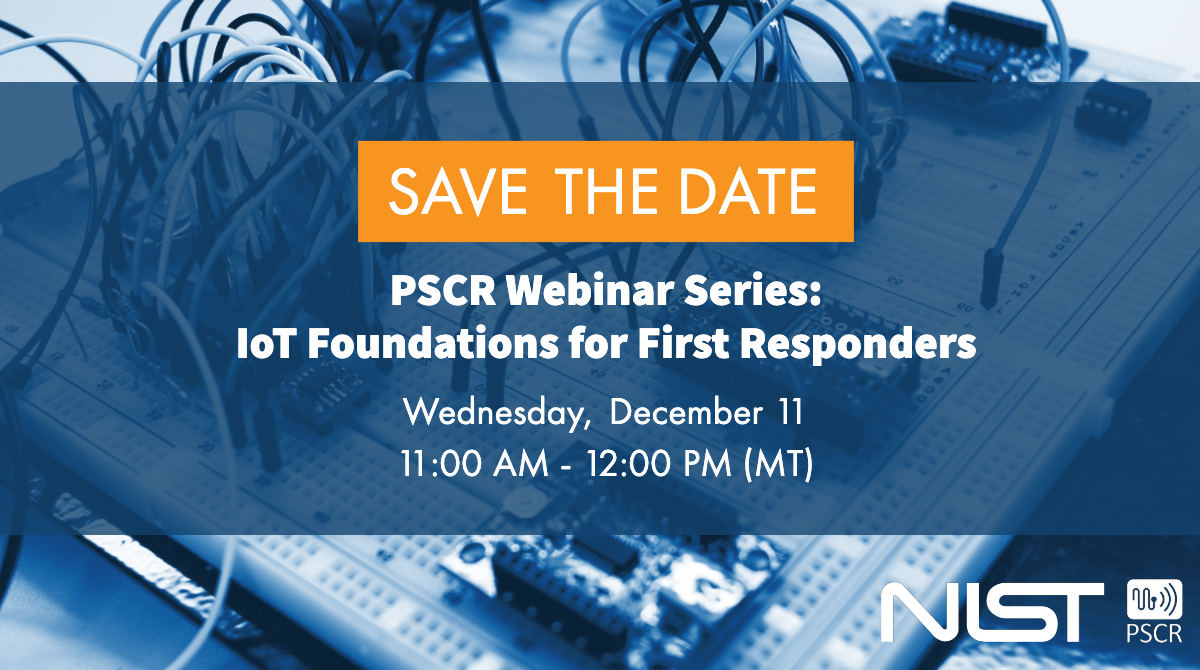 How can public safety best prepare for and leverage next-generation Internet of Things (IoT) sensor and data collection capabilities?

Join us on Wednesday, December 11, 2019 from 11:00 am – 12:00 pm (MT) for insight into PSCR’s IoT research and how public safety operators can get involved. During this webinar, Alison Kahn, Richard Reed, and Peter Hallenbeck discuss the challenges and opportunities in leveraging IoT for first responders. There will be time for Q&A.

Read about the panelists below, and register now!

Alison Kahn is an Electronics Engineer with NIST’s Public Safety Communications Research (PSCR) division. Alison is currently working on research related to Personal Area Networks for the next generation of first responders. Alison acts as the lab’s device liaison, working with vendors to ensure that public safety features are addressed in impending device releases to allow PSCR to release cutting-edge technology for the future of public safety. Alison has 14 years of experience in the telecommunications industry. Before joining PSCR in 2016, she worked on end to end device interoperability  programs for companies such as Motorola and Nokia. She also worked with commercial carriers to develop and implement carrier-specific and industry standard interoperability with the company’s network equipment. Alison’s education includes a Bachelor’s of Science in Mathematics and Computer Science in Mathematics and Computer Science from the Colorado School of Mines.

Richard Reed is a U.S. Marine Corps Veteran, business owner, entrepreneur, and Firefighter/Paramedic for the city of Aurora, Colorado. Born and raised in San Jose, California, the heart of Silicon Valley, Richard has technology and entrepreneurship in his blood.

After his service in the Marine Corps and founding and running a successful business, Richard turned his attention towards firefighting. During his tenure as a Firefighter/Paramedic with Aurora Fire Rescue, Richard served as one of the first responders to arrive at the Aurora Theater Shooting and also served as the dedicated medic for the elite Aurora Police SWAT team.

Richard’s career experience gives him unique expertise and knowledge in the technology used across the military, police, and fire domains. His in-depth understanding of the interactions between police and fire brings insights into the intricacies and complexities of interoperable communication. Richard understands the challenges in communication and the problems associated with inadequate technology and has a passion to find solutions to help bridge the technology and communication gap across the public safety sector. Richard is energized to see how the utilization of new innovations in technology will bring greater efficiency and safer ways to provide the best response for the citizens that are served.

Peter Hallenbeck has been with the Efland Volunteer Fire Department in Efland, NIC since 1992. He is currently the Deputy Chief. The Department is in a somewhat rural area, with a lot of “suburban commuters” that work in nearby Raleigh and Durham, NC. The Department runs about 500 fire, EMS, and Rescue calls per year. I-40 runs through the center of the district; as such, the call volume is a good mix of rural, suburban and high speed interstate accidents.

Peter’s “Day Job” for 40+ years has been as an embedded systems Electrical Engineer. The work has been with new start-ups designing hardware, software, and user interfaces. Peter also takes the hardware and sets up, supervises, and checks the manufacturing of the new systems. The software projects are from small embedded systems to high speed network routing and encryption systems. The projects have been in both consumer and commercial markets.

Peter has also worked in patent litigation as an expert witness. He has 8 patents in various areas including one in responder-based map display systems. Since 2011, Peter has worked full time on responder data management and display systems on his own. The system is being used in 10 PSAPs (Dispatch Centers) by about 30 departments for Fire and EMS. It supports paid, mixed and all volunteer departments with special attention to volunteer departments in rural areas where budgets are tight and volunteer responders need technology on smart phones. Larger CAD systems tend to ignore individuals as resources.

Peter is currently working on IoT solutions and standards. He is on the NPA 950/951 “Standards for Data Development and Exchange” committee. The goal is to have an end to end system so that the data standards have been tested by the “Boots on the Ground” responders. IoT efforts will not move forward without their stamp of approval.