Drones and the Future of Chemical, Biological, Radiological and Nuclear Threats 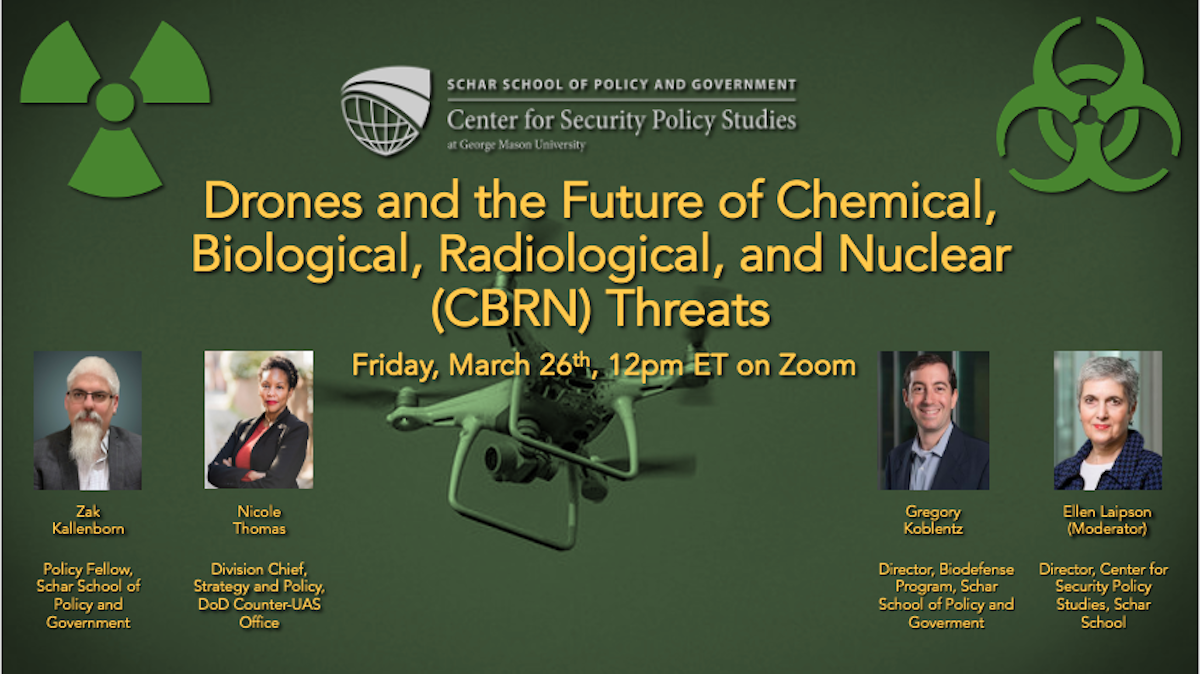 The George Mason University Schar School of Policy and Government Center for Security Policy Studies will host an web event expert panel discussion on March 26 on “Drones and the Future of Chemical, Biological, Radiological and Nuclear (CBRN) Threats“.

The panel explores the risks posed by the convergence of chemical, biological, radiological, and nuclear CBRN weapons and drones.

Drones allow terrorists to collect intelligence prior to an attack, bypass ground-based physical barriers, and carry out highly effective chemical and biological weapons attacks. For state actors, the growth and proliferation of drone swarms offer new, sophisticated ways to carry out CBRN attacks, defeat traditional CBRN weapons, and respond to a successful attack. At the same time, the United States Department of Defense is working hard to combat these threats and recently issued a new strategy around countering small drones.

The underlying question spanning the panel is: how well prepared is the United States and the global community to tackle the challenges drones pose for CBRN warfare? And what more can be done?

Nicole Thomas is a civilian with the U.S. Army and the Division Chief for Strategy and Policy in the Joint Counter-Small Unmanned Aircraft Systems Office. She is a graduate of the United States Army War College.

Zachary Kallenborn is an analyst in horrible ways people kill each other: weapons of mass destruction, WMD terrorism, and drone swarms. Officially, he’s a Policy Fellow at the Center for Security Policy Studies at the Schar School of Policy and Government; a Research Affiliate with the Unconventional Weapons and Technology Division at the National Consortium for the Study of Terrorism and Responses to Terrorism (START), headquartered at the University of Maryland; an officially proclaimed U.S. Army “Mad Scientist”, and a national security consultant.

Gregory Koblentz is an associate professor and director of the biodefense program at George Mason University’s Schar School of Policy and Government. Dr. Koblentz has authored, co-authored, or edited multiple books on nuclear and biological threats and published widely on biodefense, biosecurity, dual-use research, and the proliferation of nuclear, biological, and chemical weapons. Dr. Koblentz earned his PhD in political science at the Massachusetts Institute of Technology and his MPP from the Kennedy School at Harvard University.